THAILAND: The number of people who came into close contact with a South Korean soldier who tested positive for COVID-19 after returning home from the kingdom has increased to 235, according to Opas Kankawinphong, acting director-general of the Department of Disease Control (DDC). 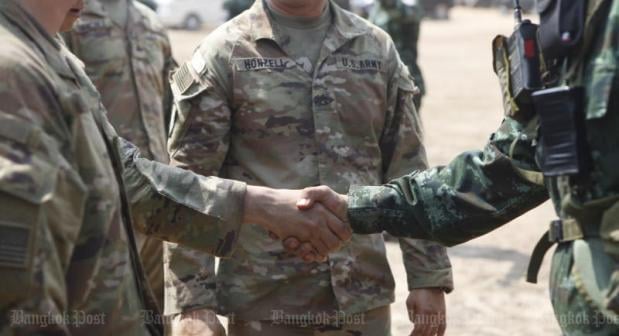 Soldiers shake hands at the end of a Cobra Gold exercise in Thailand in March 2020. Photo: AFP.

Over 170 Thai military officers are currently under quarantine after attending a meeting along with the South Korean officer during a Cobra Gold training exercise last week in Rayong.

Dr Opas said out of the 235 people identified, 210 are Thais who were considered at risk of having contracted COVID-19 from the South Korean national.

Dr Opas noted that 33 additional people were now considered to be at risk.

The officer arrived on Oct 17 and was tested while isolated in an alternative state quarantine (ASQ) facility in Bangkok until Nov 1.

He attended the meeting and military exercises on Nov 2-6, Lt Gen Chaowalit said.

The officer is said to have not left the ASQ facility during his stay. However, he tested positive for the coronavirus after arriving at Incheon Airport on Nov 8.

The RTAF has ordered its officers who attended the meeting with the South Korean to be tested and quarantined, the spokesman said.

The Public Health Ministry has not confirmed whether the South Korean’s infection was considered a local case.

Four of them were Thais and the other was a German national, according to the Centre for COVID-19 Situation Administration (CCSA).