animalsSafetytourism
By The Phuket News 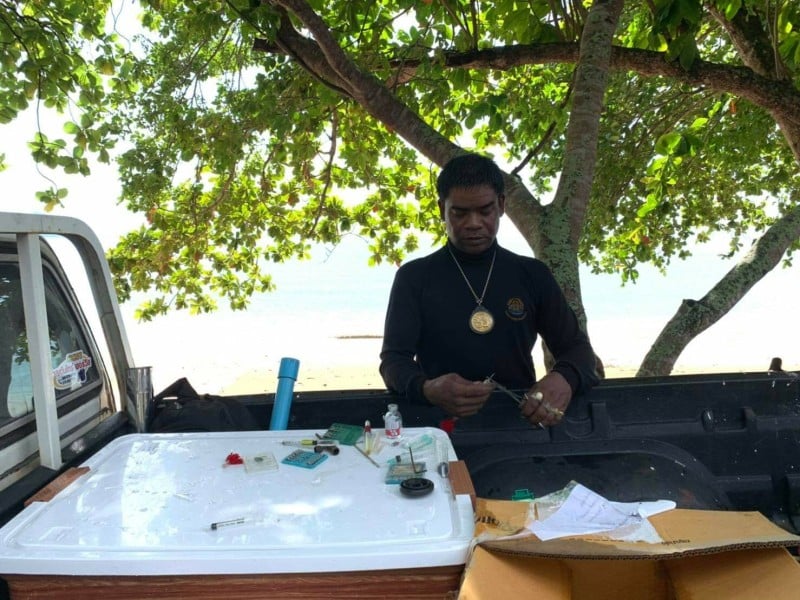 The boy, Max Smith, suffered a wound on his left calf that an officer at the Tourist Assistance Centre (TAC) in Krabi described as not serious.

The boy was taken to the First Standard Clinic at Ao Nang for first aid and has been vaccinated for rabies and tetanus, the officer confirmed today (Nov 20).

Kwunkamon Pakkarano of the Krabi Livestock Office explained to The Phuket News that a team of livestock officers were already patrolling the beach at about 10am when the incident happened.

The Krabi Governor had ordered the officers to keep an eye on the beach over the long weekend, Ms Kwunkamon said.

The officers were nearby when the boy was bitten at about 10am in front of the Golden Beach Resort, she said.

“We saw the black dog that bit the boy. About five to six other dogs were there,” Ms Kwunkamon said.

“We went to catch these dogs by using the tranquiliser gun. One member of our team took three shots at the black dog. At least one of the darts hit the black dog, but it ran away with the other dogs and we have not been able to find it since,” she explained.

“We need to catch the dog to contain it and observe it for infection of rabies,” she added.

Officials from the Ao Nang Tambon Administration Organisation (OrBorTor) have been called in to assist with the search, which has so far failed to locate the dog, Ms Kwunkamon said.

Krabi Livestock Office Chief Suripol Maboonchuay explained that the black dog is well known and was not originally a stray.

“The dog was being looked after by local villagers in the area but it was abandoned after the COVID-19 crisis began,” he said.

“Anyone who feeds one of these dogs in tourist attractions must assume responsibility as the owner of the dog. Then you will be held responsible for the dog’s behaviour, which in instances like this can result in a fine of up to B40,000 under the Animal Control Act,” Mr Suripol told The Phuket News.

“Next, all dogs on the beach must be leashed by their owners, and it is the Ao Nang OrBorTor’s responsibility to control dogs in this area,” he added.

Officials in Ao Nang were forced to take strong measures against potentially dangerous strays on the beach after a 5-year-old Finnish boy being savaged by a stray dog on the beach made international headlines last year.

The boy, Eemi Nikula, suffered scratches and bites to his torso, back and buttocks and suffered a wound about five centimetres long on his right calf.

The most dangerous wound was a bite to his neck, where fangs had punctured two holes near his Adam’s apple.

Young Eemi recovered and returned home with his family, while officials in Ao Nang launched a serious campaign to contain strays on the beach, while under pressure from the national government amid a public fear of a rabies outbreak.