GOLF: If Dodge Kemmer can get just a little more co-operation out of his short irons today (May 20), a second Asian Development Tour (ADT) title in three starts is a sensational possibility. 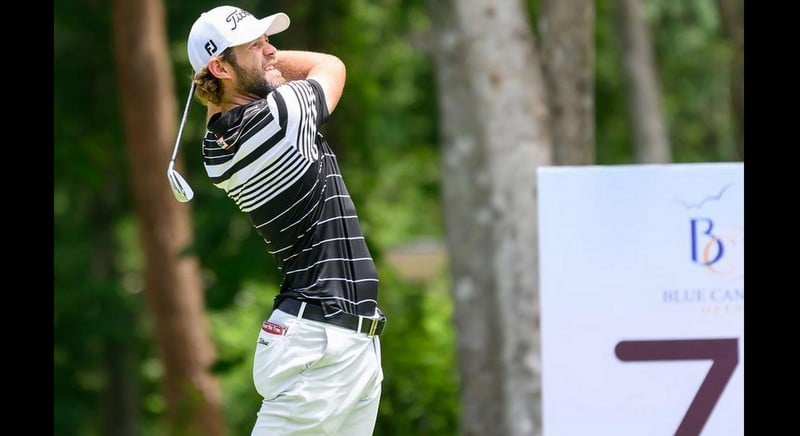 What he won’t be able to rely on is any help from Thai Vanchai Luangnitikul who will have his own victory plans after drawing level with the American atop the US$75,000 (B2.5 million) Blue Canyon Open leaderboard yesterday of low morning scores and high afternoon winds.

A 68 to go with his opening 65 saw Kemmer set the clubhouse target at -11 on the Canyon layout before Luangnitikul breezed in with a 66 as the gusts picked up at Blue Canyon Country Club.

Frenchman Victor Riu, the most consistent of the MENA Tour players at the co-sanctioned series, will start today’s final round a shot further back while a pair of Thais, Poosit Supupramai and Atiruj Winaicharoenchai, are still very much in the hunt at -9.

Kemmer won the ADT’s season-opening Gurugram Open in India before by-passing the first half of the ADT’s Beautiful Thailand Swing (BTS) to play the GS Caltex Maekyung Open.

The 34-year-old made the cut at the Asian Tour event in Seoul then jetted into Phuket to finish a handy -8 and T-19 in the Blue Canyon Classic. After two days off, he’s back to his low scoring ways even though the second round wasn’t as flawless as the first.

“Today was a good scoring round but I didn’t quite have it going like I did yesterday, wedges and short irons weren’t really there and missed a few more fairways,” Kemmer said.

"Nothing really felt as good but I got it up around greens a few times and up and down for birdie there so that definitely helped. I had a couple of bogeys but otherwise limited the mistakes.”

The trick now is finishing the job like he did in India with a closing 66 to win by three from Thai Chanat Sakulpolphaisan.

“Especially the three days ones [tournaments], it’s almost like today is Saturday [moving day] instead of Friday [the traditional second round] and it seems to be hard to follow a low round just statistically speaking so four-under I’m definitely happy with it.

“Another seven-under would have been amazing but unusual so happy with how it ended up and should be in a good spot tomorrow.”

Luangnitikul, the world No. 1391, finished T-4 at the Laguna Phuket Cup for his best finish in an OWGR event and has rebounded strongly after missing the cut at the following Blue Canyon Classic.

Suttijet Kooratanapisan hasn’t been so lucky. The first-round leader backed up his opening 64 with a windswept 79 to agonisingly miss the cut, made it -2, by a stroke. It included a bogey on the last in an inward nine negotiated in 41 shots, five over.

“I cannot hit the driver on this day, I lost about three or four balls,” the 31-year-old Thai said afterwards.

“Afternoon the strong wind is coming and it was really heavy on the last hole. Yeah, it is hard to take but the last thing [his round of 64] I think I can do it also so maybe I keep it for the next tournament.”

There was also major drama in the MENA Tour’s race within the wider BTS race with leader Tom Sloman (70-73 for -1) and second-placed David Langley (70-77 for +3) both missing the cut.

It means a third Englishman, David Hague, has an outside shot at winning the MENA Tour’s season-long ‘2020+ Journey to Jordan’ Order of Merit title in the last round. However, Hague will need some Friday fireworks as he is $3,696 behind Sloman in the money list and will need to finish fourth or better to claim the crown and with it a start in on the Asian Tour’s upcoming $1.5 million-plus International Series events.

After a Thursday 70, Hague will start the final round at -5, six strokes off the lead and four strokes behind the current joint fourth place sitters.