TENNIS: Novak Djokovic will look to stay on track for an 18th Grand Slam title, while Serena Williams has the formidable figure of Naomi Osaka blocking her path to a record-equalling 24th when the Australian Open semi-finals begin today (Feb 18). 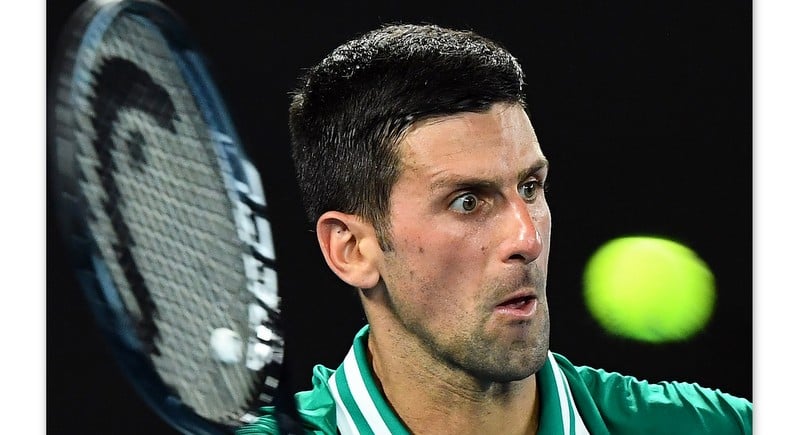 Novak Djokovic ventures into unknown territory against Russian qualifier Aslan Karatsev later today as he aims to reach the final of the Australian Open in Melbourne. Photo: AFP.

Around 7,500 fans will be back on a reduced capacity Rod Laver Arena, after a five-day state coronavirus lockdown, but Djokovic will be in unknown territory in the night match against Russian qualifier Aslan Karatsev, who he has never played before.

The world number one, who has been hampered by an abdominal injury, confessed he had not seen much of the tournament’s surprise semi-finalist - who has already seen off three seeds - but that he wouldn’t take the world number 114 lightly.

“He’s impressed a lot of people with his movement and firepower from the baseline,” said Djokovic of Karatsev.

“He doesn’t have anything to lose, really. He’s motivated.”

Karatsev, who is guaranteed to rise into the world’s top 50, is the first man in the Open era to reach a semi-final on his Grand Slam debut, and just the second qualifier to do so at the Australian Open after Bob Giltinan in 1977.

Earlier Williams, the 10th seed, opens proceedings on Rod Laver against Osaka aiming to keep alive her dream of a record-equalling 24th Grand Slam crown, wary of again falling victim to the Japanese superstar who beat her in the 2018 US Open final.

The winner will play for the championship on Saturday against either Czech 25th seed Karolina Muchova or American 22nd seed Jennifer Brady, who clash in the second semi-final on Melbourne Park’s main show court.

Williams, 39, sits one behind Margaret Court’s elusive all-time mark of 24 majors after losing four Slam finals since her 2017 victory at Melbourne Park while pregnant.

One of those was the controversial 2018 US Open final defeat to Osaka, where the American star was docked a point and a game after losing her temper when warned about coaching.

Osaka was booed by some fans and was in tears during the awards ceremony, later calling what should have been her moment of glory “a little bittersweet”.

Williams said both players had reached “closure” on the painful moment, which has seen them inextricably linked ever since.

They have played each other just once since that New York meeting, in the quarter-finals of the 2019 Rogers Cup in Toronto which Williams won in straight sets.

Brady will face Muchova in the other semi-final, with a maiden Slam final guaranteed for one of them.

Muchova, fresh from her upset of top-ranked Ashleigh Barty yesterday, said she had noted Brady’s “very big strokes” in their one previous meeting, when she beat the American in Prague in 2019.

“So definitely going to be a tough battle,” she said of Brady, who toppled compatriot Jessica Pegula to make her second major semi-final after last year’s US Open.

“I think I will have to bring my A-game to play with her because she is really playing amazing matches, having a good season.”