The ‘Monsters’ universe is one of the most unique worlds ever created by the team at Pixar. The original film, 2001’s ‘Monsters, Inc’, was a pure animated masterpiece. However, its prequel 12 years later, ‘Monsters University’, was a let-down that fans of the original film wish never existed. The fact that even the story told seemed to contradict how the lovable monsters Mike (Billy Crystal – City Slickers) and Sulley (John Goodman – Coyote Ugly) said they met in the first film seemed to justify the belief that the film just didn’t fit into the universe that had been previously created. 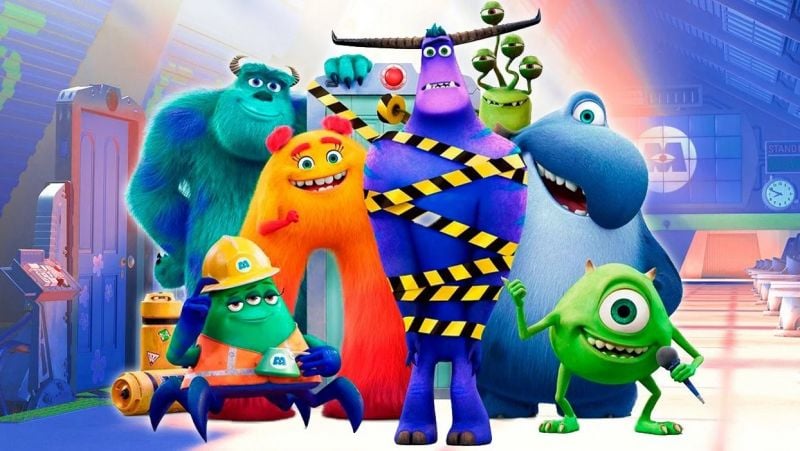 So it is with very little wonder that so many of those original fans were a little worried when Disney+ announced that they had a television series in the works titled Monsters at Work. At first fans fumed at the thought that anybody but Billy Crystal and John Goodman might voice the much loved duo, but once it was announced the comedy actors had signed on board those fans were given a small glimmer of hope.

The good news for all of those fans out there is that Crystal and Goodman are not the only throwbacks to the original film that this film has. A myriad of original characters are back this time around and more importantly Monsters at Work captures the humour and magic that made the first film such a masterpiece.

Created by Roberts Gannaway (101 Dalmatians: The Series), Monsters at Work picks up only days after the events of Monsters, Inc. The company now realises that scaring children is not the best way to harness electricity and Mike and Sulley are now running the company and overseeing the monsters, moving them from being scarers to monsters who make children laugh.

Of course that change couldn’t have come at a worse time for Tylor (Ben Feldman – Cloverfield) who has just started at the company and was supposed to be their new young scarer. Suddenly Tylor finds that his skills are not needed by the company and instead of finding himself in the glamorous role he had always dreamed, he finds himself on the fix-it crew – a crew made up of lovable losers including Val (Mindy Kaling – Inside Out), whose memories of a college friendship with Tylor are not something that he can recall. Throw Duncan (Lucas Neff – Marriage Story) and Fritz (Henry Winkler – Happy Days) into the mix and it is soon easy to see why Tylor’s new job is an absolute nightmare.

To the credit of the team behind Monsters at Work, they do all they can to make this film fit into the universe set up in Monsters, Inc. They do this by not only bringing some of the fringe monsters from the original into the storylines but also capturing the feel of the film that started everything. Once again the comedy of Mike is over the top and every joke works while the screenplay for each episode also allows for that tenderness that we saw from Sulley as well.

Perhaps the best episode of Monsters at Work to air so far is the episode where Sulley’s emotional memories of his time spent with Boo is brought back to the fore and he finds himself having to look after a toddler while Tylor and his crew try to fix the room that they have ruined before the child’s parents work out what happened.

Not only do the scenes with Mike and Sulley with the toddler perfectly replicate the heart that the original film had but the scene with the three at the baseball game captures all the humour that fans of the film could only dream would be present in the show.

If you are a fan of Monsters, Inc. then you certainly will not be disappointed by Monsters at Work. Heart, emotion and humour make this one of the best series that Disney+ have created so far.

Monsters at Work is currently airing on Disney+ in Phuket.