PHUKET: The 3% diesel tax cut in effect for three months is not enough to stave off rising prices in Phuket, Phuket Chamber of Commerce President Thanusak Phungdet has warned. 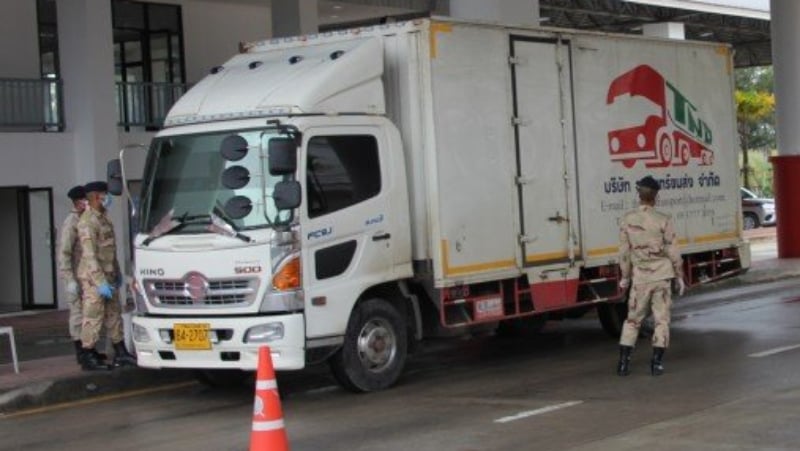 On an island where everything is brought from the mainland by road, cutting the diesel tax for three months will not be enough to stave off rising prices, said Mr Thanusak. Photo: Tha Chatchai Police

All sectors in Phuket have been affected by the rising diesel prices, Mr Thanusak noted.

"The diesel tax cut for three months from the Cabinet is not enough to alleviate [financial pressures in] Phuket, the government should freeze the price of petrol for longer than this," he said.

The price of diesel, along with the prices of other most-common forms of vehicle fuel, have risen by as much as 30% in the past six months.

The tax cut, which came into effect on Feb 18, halved the tax rate from B5.99 per litre to B3 per litre until May 20. The cut capped diesel at B29.94 per litre, keeping it below B30 per litre as promised by Prime Minister Prayut Chan-o-cha in November.

At the full tax rate, the Excise Department collects B12 billion a month in diesel excise tax, or B144bn per year, from the country’s monthly diesel consumption of approximately 2bn litres.

The tax cut will reduce tax revenue by B17bn but that should be partially offset by a rise in other tax revenue as the economy is recovering, Finance Minister Arkhom Termpittayapaisith said.

The Oil Fuel Fund Office (Offo) previously paid B7 billion a month to ensure the diesel price was capped at B29.94 a litre, below the inflated market rate of B33.73. Offo also fixed the price of LPG at B318 per 15-kilogramme gas cylinder, compared with the global market price of B432.

But all that does little to alleviate pressure on rising prices in Phuket, Mr Thanusak said.

“The prices of all consumer and even trade goods in Phuket are affected by fuel prices, as everything is brought to Phuket by road,” Mr Thanusak explained.

“Higher petrol costs make shipping goods costs more expensive, and Phuket is a province that has to import consumer products from all over the country, from Rayong, Bangkok, Samut Sakhon, Samut Songkhram or Suphan Buri, and other provinces.

“The rising petrol prices affects everyday people, shop owners, transport operators… all industries in Phuket… The groups that suffer the most would be those in trade and business,” he added.

The surge in non-diesel fuel prices will add pressure to household expenses, though the impact would vary depending on each person’s income, he noted.

“Some will be more affected than others,” he admitted.

Mr Thanusak said that the average monthly income in Phuket was “likely to be many times more” than the B1,950 Phuket Governor Narong Woonciew cited to a Senate standing committee last month, as that figure was calculated when there were no tourists coming to Phuket at all.

Price controls on essential goods are helping to contain price rises from spiralling upward further. Some industries, such as Phuket’s fishing industry, will rely more on other government support programmes to contain rising operational costs, he added.

Transport costs, such as fares charged by local taxi drivers may be soaked up by the drivers, considering the fares already charged, or they may be increased further in light of the rise in regular petrol prices, Mr Thanusak said.

“Tourists are more likely to be affected,” he said, adding that tourists still had the right to negotiate fares with ‘green-plate’ taxi drivers. Alternatively, tourists had the option of renting cars, he said.

Phuket’s tourism situation has improved, but not to the extent that many had hoped. “The current state of the tourism industry in Phuket is still not good,” he said.

Hotel occupancy was estimated at 60-70%, Mr Thanusak said, but admitted that the figure was based on the new number of hotels currently open on the island.

Some 30-40% of hotels that were open pre-COVID have so far remained closed, he said.

The number of tourists coming to the island is helping the economy, he added. “There is now local shopping turnover from this group,” he said.

Mr Thanusak agrees with the open letter by tourism figures to ease entry restrictions for tourists. “Measures should be eased, not necessarily immediately, but gradually adjusted. This is probably most suitable for Phuket,” he said.

He also agrees with Vice Governor Phichet Panaphong requesting to have COVID-19 declared endemic in Phuket.

What Phuket needs most is for development into a true tourism business destination” and to become a duty-free destination, Mr Thanusak said.

“I hope that the government will appoint one team of high-level executives to come and plan for Phuket to be a Special Andaman Tourism Economic Zone, with Phuket as a pilot province, which the private sector presented to the Cabinet on Nov 16 last year,” he said.

“The ’Special Economic Zone’ aims to make Phuket and the Andaman provinces the main areas for importing both Thai and foreign tourists and distributing tourists throughout the country,” he said.