BANGKOK: The reading and writing skills of many young children have been greatly impaired due to schools being suspended for a protracted period during the COVID-19 pandemic, according to the Thailand School Readiness survey. 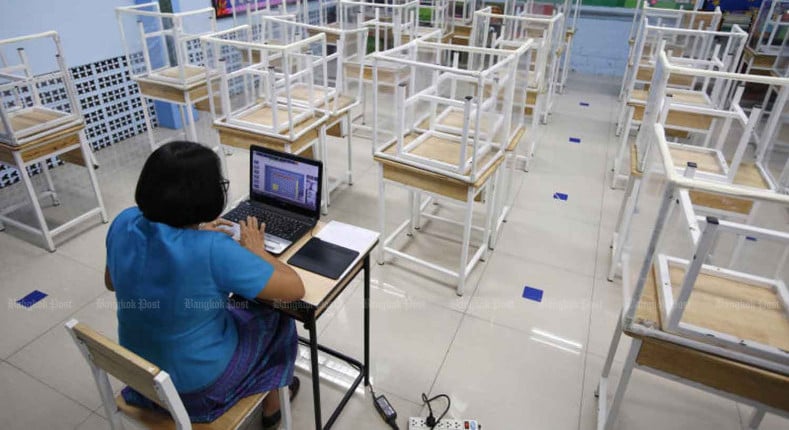 A teacher runs an online class at a school in Bangkok in June 2021. Photo: Wichan Charoenkiatpakul

The survey was jointly conducted by the Research Institute for Policy Evaluation and Design (RIPED) and Equitable Education Fund, reports the Bangkok Post.

The prolonged suspension of schools nationwide resulted in classes being held online, with children studying at home. Due to various factors, such as parents not having time to assist their young kids while they were studying online, the students tended to do less reading homework than usual, he said. After schools reopened, some children were not able to catch up with their peers.

Children who are slow learners tended to struggle more with boredom and anxiety, which discouraged them from going to school and puts them at greater risk of dropping out, he said.

“Students during the COVID-19 pandemic over the past two years may be considered a lost generation, as their slow progress in studying could affect their work performance in the future,” Mr Weerachart said.

There are also fears of a higher dropout rate as a result, as many kids find it even more challenging to keep pace with their studies, he said.

Wealthy families can pay for their children to take extra classes, whereas low-income households may not be able to afford it, he said.

Amporn Sornprasit, an assistant professor at Prince of Songkla University, Hat Yai, said due to the long periods of online classes during the pandemic, some children couldn’t remember how to read and write at all. Many are also weaker due to a lack of exercise, he noted.

Pornpimol Khirirat, head of the school development project at Songkhla University, said her research team conducted “muscle tests” on 1,918 Prathom 2 (Grade 2) students from 75 schools in six provinces - Satun, Pattani, Songkhla, Nakhon Si Thammarat, Yala and Narathiwat - and found that 98% were not in the physical condition they should be.

With the right activities, most children will be able to regain muscle strength within two weeks, she said.

The institute will forward its findings to Prime Minister Prayut Chan-o-cha, who chairs the policy committee on early childhood development, he said.