WORLD: “When I talked about this before the pandemic, people thought I was crazy. Now they tell me I was right after all,” said Arnaud Wilbrod, a French freelance editor who moved to the Estonian capital Tallinn after his home country went into lockdown. 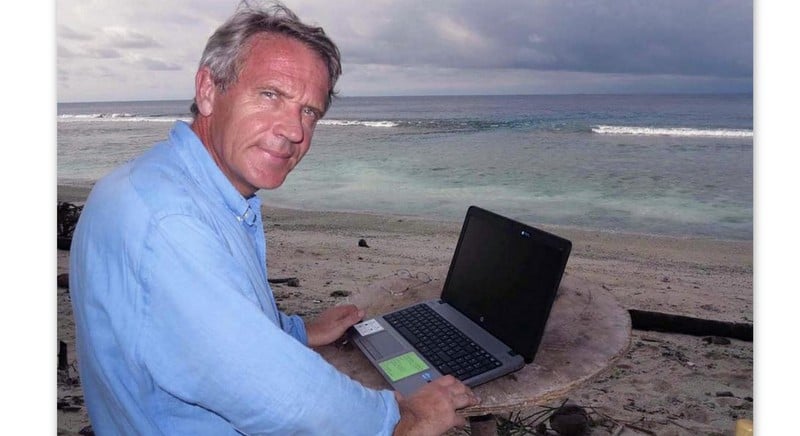 The number of people answering emails from the beach or a picturesque town square has surged and is expected to continue rising as remote working goes mainstream. Photo: AFP.

Wilbrod is just one of a surging number of people who, since the coronavirus pandemic struck, have turned to the dream of a “digital nomad” lifestyle - answering emails from the beach or a picturesque town square as remote working goes mainstream.

Once the preserve of freelancers, those with steady jobs are increasingly tempted to make the leap and some countries are eager to attract them - even as COVID-19 has made jetting off to a destination office a far higher hurdle.

Although the number of digital nomads is hard to pin down, experts believe there are millions around the world.

Around 10.9 million Americans were living the lifestyle in 2020, according to Steve King of consultancy Emergent Research - one-third more than in the previous year.

“Suddenly, a bunch of traditional employees who in the past didn’t have the freedom to travel were suddenly given it. They were unshackled from location,” King said.

He estimates that in 2020, around 60% of digital nomads were employees, rather than freelancers - up from one-third in 2019.

With potentially further years of remote working ahead, “the number of digital nomads will continue to grow,” King predicted.

Sharon, a 28-year-old American who asked that her name be changed, moved to Mexico when her company switched to home working, enjoying the sunnier weather and “the freedom to be able to adjust my schedule”.

‘Live in paradise, save money’

During the pandemic, a new type of half-time nomad has sprung up, like Denis Muniglia, who has taken to adding a few weeks of distance working to the end of his holidays after spending lockdown in Guadeloupe.

“I tell myself that distance working is a blessing: spending more time in a different environment,” he said.

What’s more, around 15 countries have stepped up efforts to attract footloose, connected workers to make up a slice of tourism revenue lost to travel restrictions.

“They have a job, so they are not taking local jobs, and they’re paid good enough” researcher King pointed out.

The top criteria for picking out a home base are “the internet connection” and “cost of living”, said Mexico-based nomad Claire Lambert.

“It’s really nice to tell yourself you’re going to live in a place that’s like paradise and set some money aside.”

Since March 2020, when restrictions slammed down in much of the developed world, the coronavirus situation has also become a powerful factor.

Last summer, Georgia - which had so far been largely spared - created a visa for people earning at least US$2,000 (B60,000) per month to live there for up to a year.

Aimed at attracting visitors with high incomes, the scheme drew 787 digital nomads, even if the virus has since made itself felt.

One of the new arrivals, South African Jenni Pringle, said she had Googled for “somewhere cheap and safe” - finding Georgia “clean and beautiful”.

“I didn’t know anything” about the country before, she added.

And Bali, a favourite with digital nomads, is working on its own special visa scheme, with tourism agency chief Putu Astawa seeing them as “a source of income... to help recover after being badly hit by the pandemic”.

But debate about foreigners has flared up again after an American lesbian couple was kicked out - one of them having published an ebook on how to evade rules presently shutting out tourists.

In Portugal, the government of the tiny archipelago Madeira backed the development of a village with free co-working spaces, homes to rent and events for digital nomads, a first in Europe.

They hope to “show off Madeira as one of the best places in the world for distance working,” said Margarida Luis, spokeswoman for the regional economic authority.

So far only around 100 of the 3,800 applicants to live in Punta do Sol on the south side of the main island have made it past coronavirus restrictions.

“I think remote work will never go back to what it was” before the pandemic, said Goncalo Hall, one of the founders of the project who hopes it will boost the island economy.