Whilst loving the world-class beaches we have on offer across the island, it’s a little difficult at times not to be disappointed at how badly they are maintained and looked after. 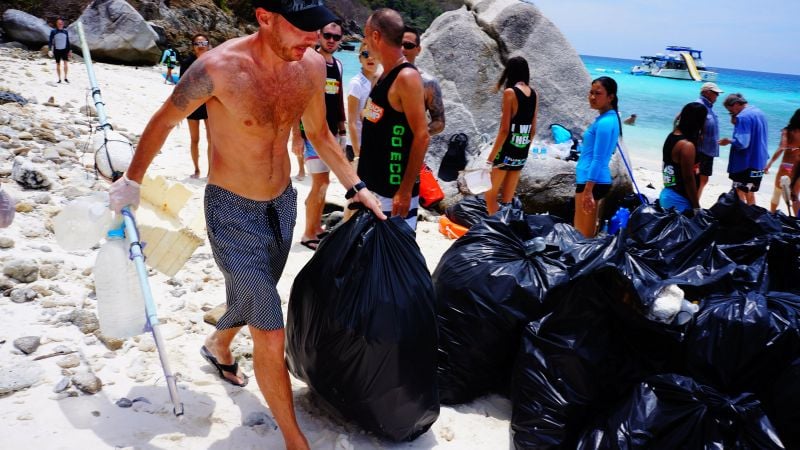 Bags of rubbish cleared from each beach clean Krix Luther takes the volunteers through the paces Sorting through the haul for recycling

On a recent trip to Panwa, with stunning views from a resort across Chalong Bay, the eye was sadly brought down to the mountain of waste lapping the shoreline, and my spirits with it. As Aretha would sing, “All I’m askin’ is for a little respect.”

There’s little point just harping on about it. There is reform afoot with business practices and education, but this will take time. What we need is positive action and inspiration at an individual level that brings about immediate change.

A step in the right direction, nay, a true giant leap, are the efforts of Krix Luther and Clean The Beach Boot Camp (CBBC).

The principle is simple. Events are organised on a number of beaches across the island. People turn up for a beach workout with a qualified trainer. They sweat it out on the sand for an hour. After the initial calorie burn, they finish the job by cleaning up the beach of rubbish for another hour. Sounds like a worthwhile local effort? Why not. But after launching the event just over five years ago here in Phuket, CBBC is now operating in nine countries, has conducted over 1,800 clean-ups, collected over 500,000kg of rubbish, and made over 32,500 people a little healthier in both body and spirit.

What drives it to be so successful? My belief is in the simple answer that it is free. No, not because we are all cheapskate conservationists, but because by being free the intention of all involved, from the instructors to the ‘volunteers’, is entirely for common good.

Clean The Beach Boot Camp is the brainchild of Krix Luther, a previous Muay Thai champion turned health and fitness specialist and personal trainer. So how did CBBC first come about?

“I’d started an early morning boot camp on Nai Harn Beach, but there was so much rubbish. It was too dangerous to train. So I asked the group if they could help me clear up the beach for 40 minutes, and I’d not charge for the session. They stayed far longer than 40 minutes and we all felt rather good. CBBC was born.”

Krix assures me that whilst ‘Boot Camp’ sounds a little harsh, in reality the sessions are designed to accommodate people at all levels working at their own pace. Initially, as an ice-breaker, people are paired up for a dynamic stretch and movement patterns prior to timed exercises for the main workout, which enables everyone to go at their own pace. A yoga session is used for the cool-down period.

“It began as an expat event, but we increasingly get locals, and we now have a Facebook page in Thai language,” Krix proudly declared. “Good deeds backed by good intentions. It’s such a nice way to bring the community together.”

CBBC has grown organically in the past few years to other areas of the globe. Inspired by the workouts in Phuket, personal trainers and friends who had re-located started asking if they were able to run events in their environments. From Angola to Kuwait, Bali to Hong Kong the word is spreading and beaches are gleaming once again. So how do people join?

“It’s as easy as just turning up and getting involved,” said Krix. “We have a local chapter Facebook page that details the events which happen every two weeks at different locations.”

It’s very worthwhile mentioning that there’s also a donation system on the CBBC website for those that want to support, but perhaps not so physically. All the set up equipment, gloves and rubbish bags are paid for by CBBC, and sponsorship is always welcome to support their ‘not for profit’ charitable efforts.

Clean The Beach Boot Camp is an incredible effort by one man’s goal to make a difference, and a legion of people who not only know, but can ‘feel’ the effects of what he’s bringing about. There’s positivity in the air. Time to look both up and down the beach again with pride.

The Clean The Beach Boot Camp website can be found at www.cleanthebeachbootcamp.com

Not a supporter of these huge scam business', but During used to be a thriving little entertainm...(Read More)