WORLD: China’s rogue rocket is in an uncontrolled free-fall towards Earth and no one knows where or exactly when it will burn through Earth’s atmosphere, but the risk of debris hitting an inhabited area remains very small, experts told AFP yesterday (May 7). 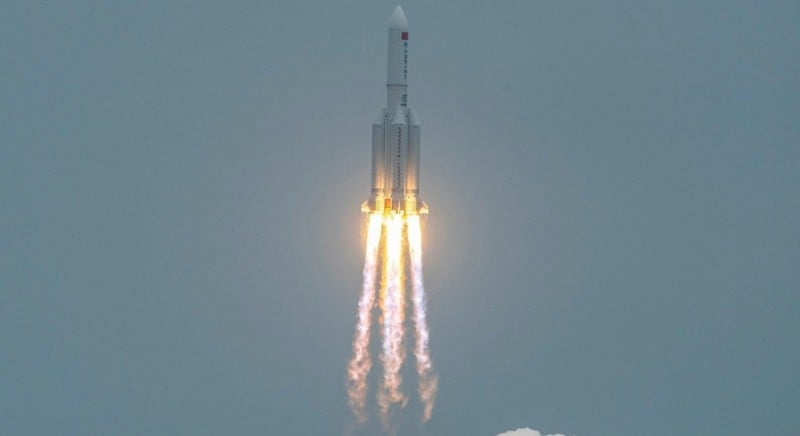 On April 29, China launched the first module of its “Heavenly Palace” space station, a milestone in Beijing’s ambitious plan to establish a permanent human presence in space.

The module was propelled by a powerful Long March 5B rocket, whose first stage is currently descending Earthward.

If Chinese ground engineers have no control over the booster stage’s trajectory, it is not due to a technical failure or some unexplained glitch. The rocket was designed that way.

From a low Earth orbit, bodies are drawn gradually by gravity towards the surface of the planet.

Such objects are usually consumed by heat as friction from an increasingly dense atmosphere increases on approach.

But the Long March rocket is so massive - up to 18 tonnes - that is it unlikely to burn up entirely.

“Given the size of the object, there will necessarily be big pieces left over,” said Florent Delefie, an astronomer at the Paris-PSL Observatory.

“If the rocket is composed of materials that don’t separate on re-entry, it’s even riskier,” he added. “That would appear to be the case for the Long March 5B.”

This was no doubt clear to Chinese flight engineers.

“The Chinese should have anticipated a controlled re-entry with a retrorocket, which is what the Russian did when they removed the Mir station from Earth orbit,” explained Nicolas Bobrinsky, head of engineering and innovation at the European Space Agency.

Given the rocket’s altitude - 150 to 250 kilometres - its re-entry is very difficult to anticipate.

Because lower levels in the atmosphere are more prone to variations in density, “we can’t really say exactly when that will happen,” Bobrinsky said.

As of late yesterday, European time, it was forecast that re-entry would happen between 9pm GMT today and 7am GMT tomorrow. That range will continue to narrow in the coming hours.

“But even one hour before impact, the level of uncertainty will be high,” Bobrinsky said.

One thing is sure: the spent booster is orbiting on an inclination to the equator of about 41 degrees. This means that any debris will fall within 41 degrees North and 41 degrees South, which includes the tropics and a generous band on either side.

Greece, Spain and north Africa are within that belt, as are most of the United States and China. France and Germany lie outside it.

The most likely landing zone is water, simply because nearly three-quarters of the surface of the planet is covered by oceans.

“The chances of debris landing on an inhabited zone are tiny, probably one in a million,” said Delefie.

Even if fragments of the rocket do land on buildings, the speed of impact will be relatively slow at about 200 kilometres per hour (125 miles per hour). By comparison, a meteorite can reach speeds of 36,000 km/hr as it hurtles towards Earth.

Has this happened before?

In 2020, debris from another Long March rocket fell on villages in the Ivory Coast, causing structural damages but no injuries or deaths.

Since the launch of the first satellite in 1957 by the Soviet Union, tonnes of rocket stages, satellites and instruments have been sent into space.

NASA estimates that there are about 34,000 objects of at least 10 centimetres (four inches) in diameter circling Earth’s today.

Since the beginning of the space age more than 60 years ago, some 6,000 objects have made an uncontrolled re-entry into Earth’s atmosphere, and only once has any debris struck a human being. Even then it did not result in injury, according to Stijn Lemmens, an expert at ESA.