PHUKET: The Cabinet at its mobile meeting in Krabi today (Nov 16) approved a slew of tourism and development projects, including officially approving for the Thailand Convention and Exhibition Bureau (TCEB) to submit a bid for the rights for Phuket to host a World Specialized Expo 2028. 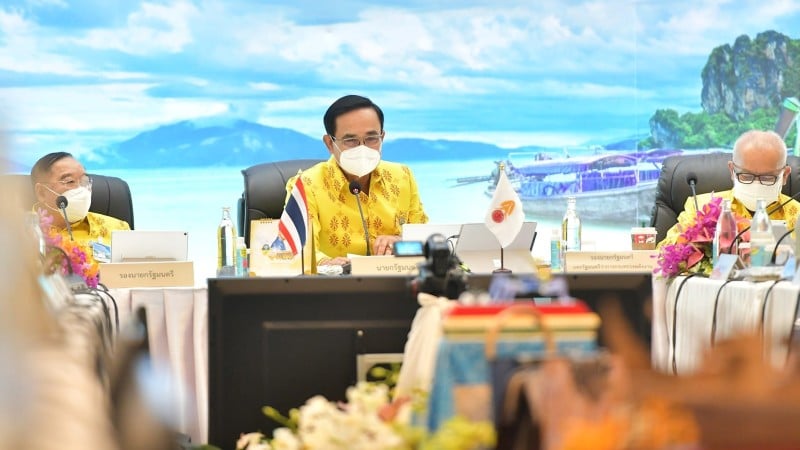 The move to bid to host the expo was in line with Phuket’s long-term development strategy, said Thanakorn Wangboonkongchana, spokesman for the Prime Minister’s Office.

“The government will gain revenue from tax collection of B9.512bn during the event,” he added.

Present for the meeting were were chairpersons and representatives from the Chambers of Commerce throughout Southern Thailand, and the Federation of Thai Industries in Phuket, among other leading figures, noted the report

The Prime Minister thanked the people of Krabi for a warm welcome from yesterday’s visit, the report added.

“I am glad to see progress and the area feel alive after the government policy to open the country on Nov 1,” he said.

“The important thing that we need to do next is to track and facilitate travel in and out [of Thailand]. Management of airports must be convenient and fast. Today, the trend of the number of new infections and deaths has decreased. All of this is a joint responsibility of the government, the public, including business owners and the private sector, who must help each other in implementing public health measures to prevent and control the spread of the epidemic to make tourism safer,” he added.

“This will allow relevant agencies to expedite the consideration of urgent needs and to operate in accordance with the budget limit,” he said.

The Cabinet approved seven projects of “urgent need”, with a total budget of B494 million, Spokesperson Mr Thanakorn said after the meeting.

Among the projects approved were the Phuket Health Sandbox Project.

The other projects approved comprised:

The Prime Minister also agreed “in principle” with a slew of local tourism development and economic recovery projects.

The Ministry of Public Health Ministry of Interior, Ministry of Tourism and Sports, Ministry of Culture, Ministry of Education and other “relevant agencies” were all tasked with considering and determining the work plan and to draft proposals for projects including:

1. Remedial, rehabilitation and assistance to those affected by the COVID-19 epidemic, namely:

Other projects approved in principle included “a study of transportation networks to solve traffic problems in urban areas and support tourism strategies in the southern provinces of the Andaman Coast”.

Also slated for further progress were:

“The private sector must continue to drive on. However, please understand that the budget is limited, and which is the money of all Thai people. The government is responsible for allocating [funds] to achieve the most cost-effective and beneficial use under strict fiscal discipline,” the report concluded.