PHUKET: The Cabinet meeting in Phuket today (Nov 3) concluded with the Prime Minister and the entire entourage of Cabinet ministers failing to even speak about the critical issue of restoring PhuketŌĆÖs ailing tourism industry, which has been devastated by the COVID-19 protection measures banning international tourists from visiting the island.

economicstourismCOVID-19politics
By The Phuket News 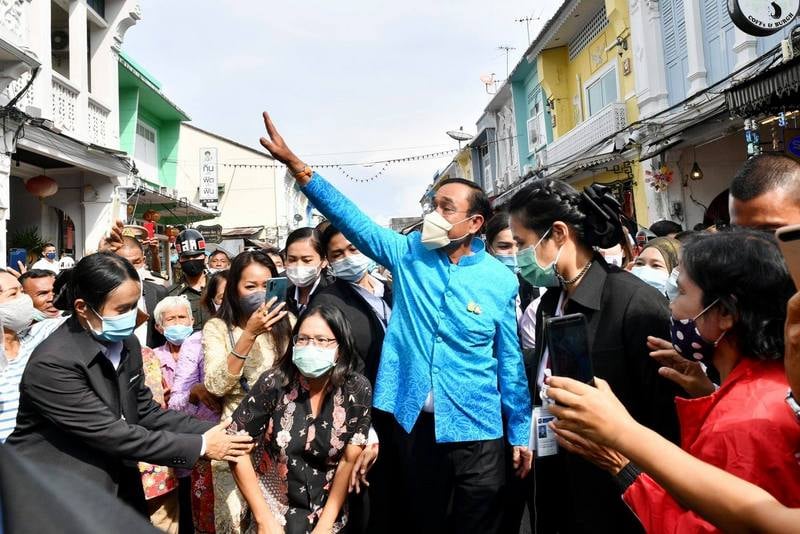 Instead, Cabinet today focussed on farming, rising rubber prices, restoring and conserving marine life, proposing Thailand to be the home of the Asean Centre for Public Health Emergency and Emerging Diseases, and “reducing poverty and improving people’s lives by preparing them for change”.

Not even flood prevention was on the agenda.

At the time this article went to press, not a single member of Cabinet had bothered to venture out to areas suffering heavily amid the economic crisis, notably Patong, Kata and Karon, to see for themselves the extent of the damage done to local residents’ livelihoods.

Prime Minister Prayut Chan-o-cha today concluded his visit to Phuket with a tour of Phuket Town.

PM Prayut landed at Phuket International Airport yesterday afternoon to stage a cursory review of the procedures and screening processes for allowing foreign tourists to enter the country at the airport in front of a company of reporters brought from Bangkok.

Even then, PM Prayut made sure to not speak a word about whether or not, or when, Phuket airport will finally be approved to receive international tourists.

However, all state news agencies failed to even recognise the aircraft’s landing until Tuesday, when NNT and the Public Relations Department of Thailand (PRD) both reported the Emirates flight as the first scheduled service to land at Phuket International Airport since the COVID-19 lockdown began.

A Qatar Airways scheduled flight, Flight QR978 from Doha to Phuket, is due to arrive tomorrow (Nov 4).

Both flights are to operate two times a week, reported NNT

“The Ministry of Foreign Affairs, in collaboration with Emirates and Qatar Airways, operates two international airlines arriving at Phuket International Airport to increase travel options for various groups of passengers, such as business travelers, long-term residents,” NNT also noted in its brief report.

The PRD identified both flights as “semi-commercial flights” and described the flights as the first allowed to arrive in Phuket carrying tourists entering the country on the Special Tourist Visa (STV).

“The Ministry of Foreign Affairs is in discussions with additional airlines to launch semi-commercial flights to Phuket International Airport,” the PRD noted.

Tourism & Sports Minister Phiphat Ratchakitprakarn also arrived at Phuket airport yesterday, but remained silent on any aspect of the possibility of Phuket directly receiving any international tourists. He also made no mention of Phuket’s first scheduled inbound international flight arriving for eight months while he was standing in the same airport.

The best the island’s suffering tourism industry received were words of support from Prime Minister Gen Prayut Chan-o-cha for 13 initiatives presented by Phuket tourism and business leaders to help develop Phuket and boost tourism to the island.

The moral support came at a closed-doors meeting held at the Duangjit Resort and Spa in Patong yesterday evening. At the meeting were representatives of tourism organisations and local businesses as well as the governors of the six Andaman coast provinces: Phuket, Phang Nga Krabi, Trang, Ranong and Satun.

Prime Minister Prayut attended the meeting to receive the 13-initiative request in person, but decided to leave it to Government Spokesman Anucha Burapachaisri to announce the acceptance of the initiatives to the press.

Among the key financial initiatives presented to provide support to businesses in Phuket struggling amid the current economic crisis were an extended moratorium on business loans and the setting up of a B50 billion soft loan facility for tourism operators in the Andaman region.

Other measures included providing assistance to employers to prevent layoffs in the tourism industry and the reduction of the rate of social security contributions.

Even reducing the land and building tax rate by 90% throughout 2021 was being considered, said Mr Anucha.

The announcement came last night, ahead of the mobile Cabinet meeting held at the Splash Beach Resort in Mai Khao today, where the 13 initiatives were to be discussed and hoped to be approved by the Cabinet.

According to the minutes of the mobile Cabinet meeting provided by the Phuket office of the Public Relations Department, the only initiative among the 13 presented discussed today was the possibility of providing soft loans. However, even then, no decision was made.

Speaking to the press after the Cabinet meeting today, PM Prayut said, "The government will find more suitable measures for people to travel in the country."

That was the sum total of the Cabinet’s focus on tourism today.

Regardless, Mr Anucha said after the meeting in Patong yesterday that first and foremost Mr Prayut agreed to develop Phuket to become a world health tourism destination,

“The Prime Minister also talked repeatedly about the short- and middle-term plans for recovery of Phuket’s tourism industry, and his support for plans for health, sport and MICE tourism,” Mr Anucha explained.

“The overall plan will create a new dimension of sustainable tourism and prepare for the impact of future crises,” he added.

“The government will work on small or easy projects first, such as holding training and seminars on the island,” Mr Anucha said.

“The government today wants to promote tourism in the country by encouraging Thai people to travel across provinces. The important thing is that the government must take care of everyone, entrepreneurs, farmers in every region, with the best use of the budget. Additionally, to educate Thai people to know how to deal with crises in the future,” he noted.

“The Prime Minister also handed over policies to the Governor of Phuket, in order to restructure the economy to be diverse, so that Phuket residences can benefit from both direct and indirect tourism,” he added.

The support for the initiatives was much welcomed by leading Phuket business figures, but also received with some caution.

“I appreciate that the PM received all 13 issues from us. Meanwhile, we request that we want them to take action soon as possible,” he said.

The project for the government to pay half the salaries of new graduates hired was of little value to businesses that could not afford to hire any new staff, he said.

He also called for the government to launch a campaign to support Thai tourists travelling by car.

Mr Kongsak also urged the government to understand that Phuket was unlike other popular domestic tourism destinations in the country, especially those within easy reach from Bangkok.

“We need policies that will help to keep us alive until the middle of next year,” he said.

Preechawut “Prab” Keesin, head of the Pisona Group of companies, was positive about the response the 13 initiatives had received.

“I feel like we have hope. We hope that the Cabinet will help us with some of the issues that we presented to them. Even if they approve just one, it would help,” he said.

“Even though the PM did not make any exact promises, he has now received all the issues for consideration already,” he added.