Buzzing at Patong Beach with the Golden Fly Series

Buzzing at Patong Beach with the Golden Fly Series

ATHLETICS: Thailand’s Suttisak Singkhon was the toast of Patong Beach last Saturday (Dec 5) as he won the men’s long jump contest as part of the inaugural Golden Fly Series event. 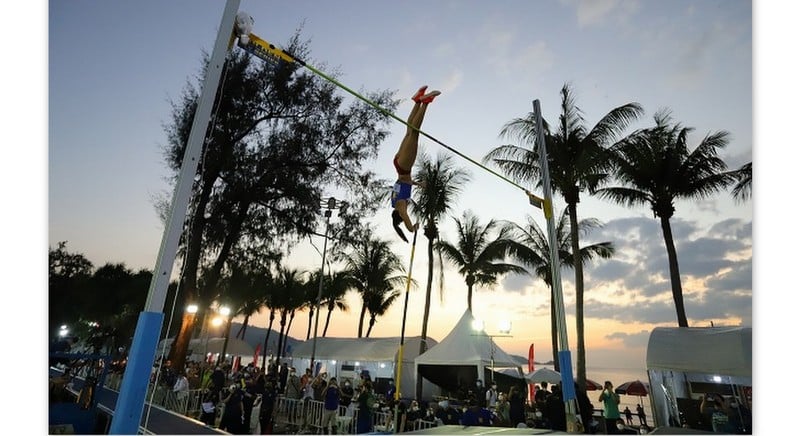 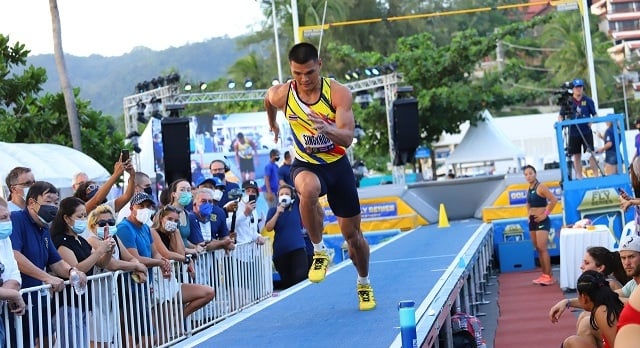 The same contest saw Stelios Malakopoulos of Greece come fifth with a jump of 6.68m. Malakopoulos is the Paralympic World Record Holder and a Multiple Paralympic Champion in the T 62 category.

Elsewhere, pole vaulter Holly Bradshaw brought some Olympic shine to proceedings as she triumphed in the women’s competition, making light of the rather windy conditions that the island experienced last weekend. The Brit, who won a bronze medal at the Tokyo 2020 Olympic Games this summer, vaulted 4.51m to take the victory ahead of Kristen Brown of the USA and Natalie Uy of the Philippines.

Austin Miller of the USA won the men’s pole vault competition at 4.70m, ahead of compatriots Jacob Wooten and world number 3-ranked Matt Ludwig, who also competed at the Tokyo Olympics.

In the women’s long jump Nastassia Myronchik-Ivanova of Belarus took the title with a jump of 6.47m. She was followed by Indonesia’s Maria Natalia Londa, who recorded 6.35m, and Parinya Chuaimaroeng of Thailand who clocked 5.92m.

Competitors battled it out at Patong Beach an apparatus called the “FlySwat”, which with a total length of 83 metres and weighing 25 tonnes is the largest and most flexible certified mobile athletics facility in the world, specifcally configured to accommodate the pole vault and long jump disciplines.

“This world-class sporting event is being held for the first time in Asia to stimulate the economy and create tourism trends in Thailand and Phuket,” Mr Phiphat said.

“With the hope that the public will join the event and experience this kind of sport closely, to inspire Thai people to turn to exercise and lead to the development of an international athletics athlete,” he continued.

“It is also a good opportunity to awaken the trend of sports tourism and to promote the image of Thailand to tourists around the world, which shows the potential and readiness of the country in the hope of stimulating continually growth of the Thai tourism economy in response to the policy that sports can help restore the economy and society of Thailand in a sustainable way,” he said.

Phuket Governor Narong Woonciew commented, “The organisation of this competition along Patong beach comes with great cooperation and support from all parties, which the province [provincial government] has prepared in terms of hotels, training grounds, playing fields, medical support and disease prevention, as well as providing knowledge about the guidelines for compliance with the requirements of all officials to support athletes from all countries around the world.

“All tourists and Thai citizens traveling to attend the event are safe throughout the competition, from the time they arrive here until they return safely. This helps to enhance a good image and build confidence in Thailand in managing the COVID-19 epidemic. It also shows the potential of Phuket Province to host sporting events and other events in the future,” he said.

Sports Authority of Thailand Governor Mr Kongsak explained to those present, “The Golden Fly Series is a world-class sporting event that has been held in many areas both inside and outside Europe. This year, Thailand is the host of the competition and has succeeded in meeting the targeted policy plans, which in addition to helping to raise the standards of national sports to international sports standards, it also helps to stimulate the economy and tourism in the country through sports tourism.

“It also helps to build confidence in Thailand in the eyes of the world in controlling and managing the epidemic situation of COVID-19 effectively and with strict competition standards and disease prevention measures.

"This competition was successfully accomplished very well. On behalf of the Sports Authority of Thailand, I would like to thank Phuket, both the local government and private agencies, as well as Thai people and other supporters that have given great support to the management of the competition.”

The Golden Fly Series is the creation of former Austrian national Athletics Coach Armin Margreiter who launched across four major European cities in 2013 including Innsbruck, Munich, Cologne and Salzburg.

Margreiter’s dream was to bring what he considered the most spectacular Queen of Olympic Sports - Athletics - to the heart of some of the world’s most beautiful cities and deliver attractive elite sports events to the public. Additionally, it strives to teach kids about athletics and a healthy lifestyle and is free to attend.

After a two-year coronavirus-enforced hiatus, the finally touched down in Phuket where it wowed spectators who marvelled at the athletes at such close quarters.

Video clips from all the weekend’s action can be accessed via the following links:

More information on the Golden Fly Series can be accessed here: