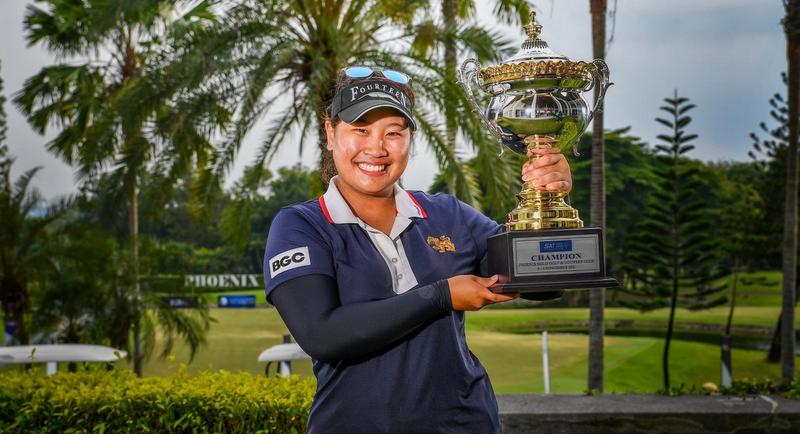 Chanettee Wannasaen poses with the trophy after winning the SAT-TWT Open at the Phoenix Gold Golf and Country Club in Pattaya. Photo: Bangkok Post

The 17-year-old from Chiang Mai produced a solid final-round 68 without a bogey to win on 11 under-par-205, beating Arpichaya Yubol by a stroke at the par-72 lay-out, reports the Bangkok Post.

After making an easy championship putt, the teenage star felt relieved to finally win a title after finishing second four times, including her loss to Arpichaya in the first SAT-TWT Open two months ago.

“I’m speechless. I finally made it after coming so close many times,” said Chanettee, who received B367,500 in prize money.

“Normally I don’t play well on the back nine but today I was handling the situation well.

“I was patient out there and tried not to lose my concentration.”

Arpichaya, who won back-to-back titles on the Thai LPGA Tour coming to Pattaya, saw her challenge for the title hit by a double bogey at the 15th hole.

Although the 18-year-old from Saraburi bounced back with two straight birdies on the 16th and 17th holes, it was not enough to catch her younger opponent.

“I have to give credit to Arpichaya for her fighting spirit after that double bogey,” said Chanettee.

Arpichaya failed to force a play-off after missing a birdie putt on the final hole.

“Chanettee played a good short game today. But I’m happy that I hit 10 under at this course for the first time,” said Arpichaya.