PHUKET: After a standoff of several hours, an excavator is now knocking down the Beach Club at Nai Yang Beach. 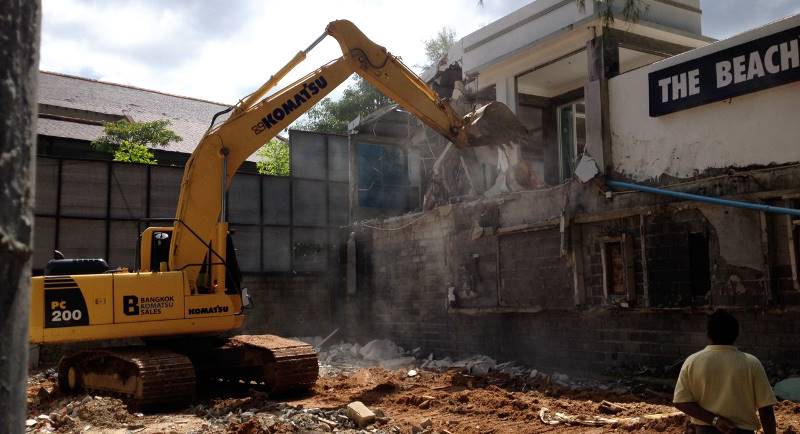 End of standoff: the excavator goes to work. One of the cars in the blockade is removed by a tow truck. Local Tambon Sakoo staff led by deputy director Surin Yotharak, and backed by some 30 Navy personnel carrying assualt weapons, machine guns, a shotgun and pistols, arrived this morning (December 8) to find the way to the Beach Club blocked by cars.

The Beach Club is one of the few remaining illegal structures at Nai Yang.

Leading opposition to the demolition was Beach Club owner Aroon Paewpanchu, accompanied by some of his staff and a handful of local supporters.

Mr Aroon complained, "The final court decision is not until tomorrow. The OrBorTor is rushing things. This is not fair."

Mr Surin replied, "The court has already decided that his land paper is not legitimate. He has only a SorKor 1, which actually refers to another piece of land."

Initially four vehicles were arranged to block the way to the club in a last-ditch attempt to stop the excavator doing its work, but a tow truck was brought in and removed one of them, taking it away to Tha Chat Chai police station.

This cleared the way for the excavator, which is now at work.