“Dam!” I thought, “they’ve actually got it right.” It was early on a sodden Sunday morning in June and that very weekend the Meteorological Department had said with all-knowing solemnity that the day would mark the start of Phuket’s “Rainy Season”. Some tasty food is available nearby. 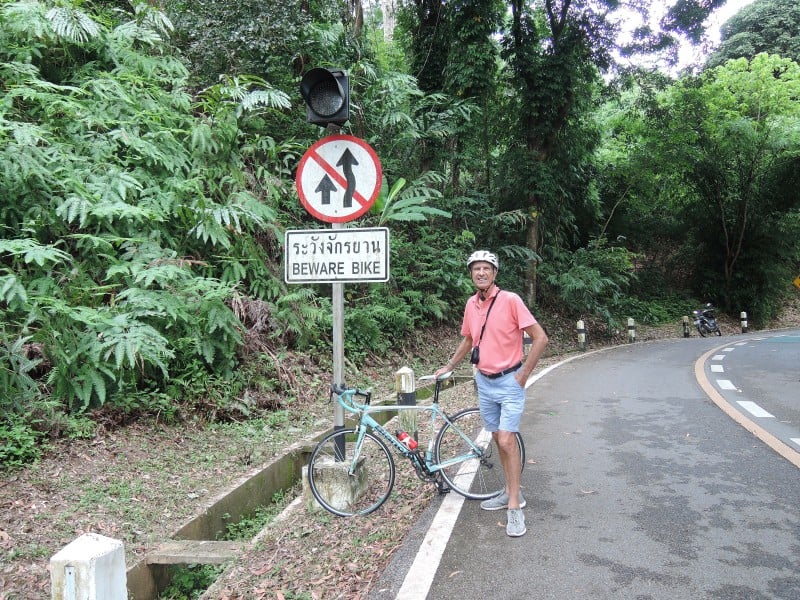 The ride to and around the reservoir includes stunning lush surroundings, free.

Given the hilarious mismanagement, U-Turns, contradictions and general mayhem surrounding the handling of the pandemic, I hardly expected that the “Showers that Pee” would get something as notoriously unpredictable as Phuket’s weather 100% correct. Yet, it was as though God, Buddha or whoever’s in charge up there had received instructions direct from City Hall and turned on a Celestial Garden Hose exactly as ordered.

It had poured most of the night and at 7am, it was one of those gloriously verdant, sodden, Phuket mornings when the world seemed stunned into an adoring silence at the sheer life-enhancing power of the night’s torrential abundance. I decided a mountain-bike ride at Bang Wad Dam adjacent to the Loch Palms Golf Course in Kathu would be just the ticket to welcome in this new season of fruity mellowness and so creakily fell out of bed to get kitted up!

Cycling during Phuket’s wet season sees a veritable landslide of slippery leaf-mulch on the tree-covered six-kilometre loop road around Bang Wad Dam, plus plenty of muddy puddles, drenched and sleeping soi dogs and the occasional fallen branch, hence my tough, mud-bespattered mountain bike was summarily hoist out of the shed where it had been slumbering for the past drier months, during which my Italian road bike had been my chosen instrument of genital torture. A quick grease up and my fat-tired friend was fit to go as I lifted it onto the car’s bike-rack.

I parked below the dam wall itself, mounted my trusty steed and was on my way as a self-conscious morning sun cast dappled pools of light between the branches of the vaulting Casuarina trees that surround the reservoir.

Walkers, joggers and other cyclists were soon out in abundance this morning, perhaps seeking a way of escaping the clutches of the viral depression by embracing the natural wonders of Phuket’s great outdoors with enthusiasm. These happy hordes were being well-managed by the authorities, with loud-speaker vans blaring out advice about the niceties of socially-distanced exercising and the importance of mask-wearing.

So, a new Shakespearean dilemma of “to mask or not to mask” became the topical question. Clearly mask wearing is rather counter-productive to healthy and enjoyable exercising, yet cyclists and runners alike seemed to have read the same scientific studies as I and were keeping their distance from each other, as is now recommended.

Air flows emanating from the lungs of panting athletes of various kinds have been shown to project viruses far further than when people are stationary. You can find various studies attempting to quantify exactly what is now the safe distance to maintain from another cyclist or jogger, and this depends on a number of complex variables including relative speeds of the athletes, wind and air perturbation, temperature, air density etc. A rule of thumb is to allow for at least a separation of 20 metres from other cyclists when riding in these viral times, and of course riding in another cyclists’ slip-stream is now a very bad idea!

As I looped the mainly flat, verdant, cycling corridor with the turbid waters of the lake on my right, I couldn’t help but muse about the gloomy virally-challenging times which our society has unleashed upon itself. Yet, equally I was struck by the collective spirit of human optimism on display, as families, couples and ardent young athletes in-the-making, ran, pedalled, strolled and laughed around the reservoir, or set up picnic tables by the lakeside.

I cycled for nearly two hours, looping the lake and building in some hill descents and climbs at either end of the dam wall, generating a good appetite for a fresh coconut and some chicken skewers sitting in the grassy picnic area by the lakeside, while watching the happy scenes around me. It was good to see so many enterprising stalls and mobile eating stations doing a thriving business and such a general feeling of pleasant sociability in these stressful times.

We may well be in one of the darkest periods of our island’s long and varied history, yet the indomitable spirit of Phuket and its people was on abundant display here and I thought, “What a dam fine way to deal with a pandemic!”