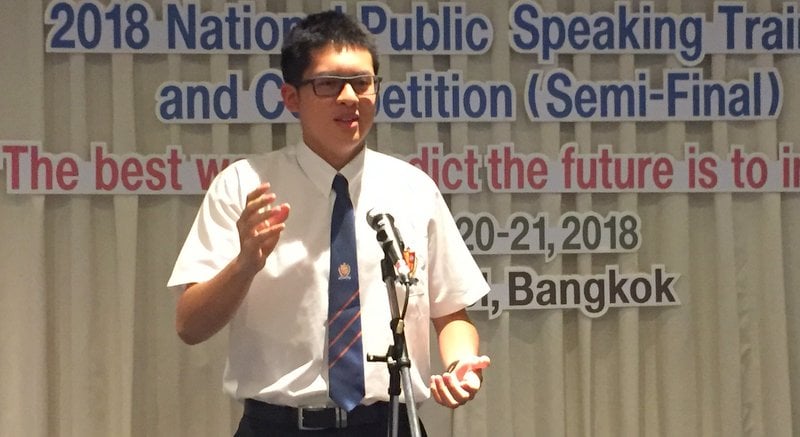 Thanadon ‘Albert’ Tantivit’s speech on the topic ‘The Best Way to Predict the Future is to Invent It’ saw him enter into the impromptu round. Albert addresses the jusdges during the competition.

The National Final, organised by the ESU together with the Ministry of Education, will be held in Bangkok on March 30.

Thanadon won his way into the National Final by being ranked as one of the top 10 of 68 students who competed in the semi-final round in Bangkok on Sunday, January 21.

At only 16, Thanadon was one of the youngest competitors and was up against students from some of Thailand’s most prestigious universities. He drew on his previous experience of debating and skills learnt as a member of the BISP Public Speaking and Debating Club.

Thanadon presented a five minute prepared speech to the given theme of “The Best Way to Predict the Future is to Invent It”.

Impressed by both his confident delivery and the depth of his content, the judges selected Thanadon to go through to the impromptu round where he had only 15 minutes to prepare a second speech on the theme “You are What You Read”.

Both the judges and the audience were wowed by Thanadon’s articulate critique of the media’s portrayal of women in beauty magazines and advertisements.

Thanadon’s coach Ms Leica Burley said that she was very impressed with his performance. “He is extremely perceptive about global affairs and can think creatively under pressure. He has taken every opportunity to learn and grow from the competition so far, and I look forward to seeing what he can do at the National Final”.

The National Final, to be held in Bangkok on March 30, will see the top ten students present a prepared speech on the theme “Great Artists Have No Country”.

Based on this speech, the top three students will go on to an impromptu round. The winner will be named the Thailand National Champion and will go to London in May to compete at the International Final.

This is the second year that BISP has been involved in this competition under the direction of Ms Burley, BISP’s Key Stage 3 Coordinator and English teacher.

Last year, Year 12 student Rebecca Preen was chosen as the national finalist to represent Thailand and made it all the way to the international semi-finals in London, competing alongside 53 other 16-20 year olds who were each representing their country.