Bautista on the bounce in ‘My Spy’

Bautista on the bounce in ‘My Spy’

There seems to come a time in every action hero’s career when they decide it might be time to make a family film. For some it works really well! Say what you like about Arnold Schwarzenegger’s ‘Kindergarten Cop’, but it is still a film that will always bring a smile to your face whenever you go back and give it a watch. 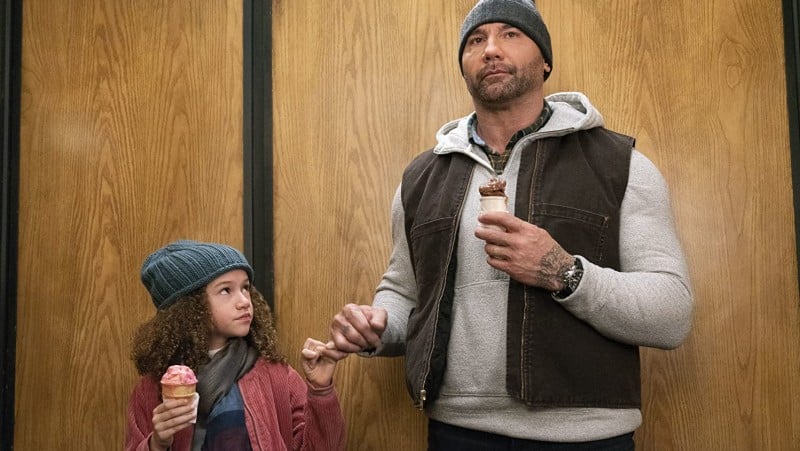 Dave Bautista as ‘JJ’ with the sharp and endearing ‘Sophie’ (Chloe Coleman) in ‘My Spy. Photo: IMDB

But the hits for action heroes deciding to deliver a family film though are usually very few and far between. Has anyone ever tried to go back and watch Vin Diesel’s The Pacifier after enduring it the first time?

Still, that path full of our action stars’ most cringe-worthy moments has not frightened wrestler-turned-actor Dave Bautista from deciding that it is his turn to try and create a family favourite. Sure Bautista has already endeared himself to many younger audience members with his portrayal of the gruff but loveable Drax in the Marvel universe but with My Spy there is no costume to hide behind – this is Bautista trying to make people of all ages laugh using just his acting and comedic abilities.

In My Spy, Bautista plays JJ, a hardened special-forces soldier who is trying his hardest to become a CIA agent. The transition isn’t successful though as JJ lacks all the class of James Bond and hits anybody that stands in his way with the subtleness of a sledgehammer. He can’t even put on an accent that works well enough to fool the bad guys.

When he blows his first major case his boss David Kim (Ken Jeong – Community) teams JJ up with a tech expert named Bobbi (Kristen Schaal – Toy Story 3) and has them watch the widow and child of a deceased arms dealer whom Kim believes may hold the secret of their next case.

Through his sheer bumbling nature the young daughter, Sophie (Chloe Coleman – Big Little Lies) picks JJ as a spy pretty much straight away and then blackmails him into teaching her to become a spy or she will expose his true identity to her mother, Kate (Parisa Fitz-Henley – Fantasy Island).

While a brief look at the plot of the film does make My Spy seem pretty simplistic, to give the film some credit it does actually go a little deeper than expected and it is that depth that makes the film not only watchable but also enjoyable.

Where a lot of these kinds of comedies decide the best way to get a laugh from the action heroes is to use slapstick and physical comedy the team behind My Spy decide to give Dave Bautista a little bit more credit than that. Together director Peter Segal (Get Smart) and his screenwriting team put Bautista and Coleman to the test with a storyline that mixes drama, comedy and action together as it depicts Sophie as a girl whose life is very much in danger while she battles with issues including bullying and dealing with her father’s death.

Bringing themes like that in the storyline allows young Chloe Coleman to show that she is an actress with a big future ahead of her and reveals why she has been cast in Avatar 2. At the same time it also leads to some emotional and touching moments between JJ and Sophie. While JJ may be a bumbling mess with his work life he is willing to go above and beyond in order to protect and help a young girl who is desperate for his help.

Parents of young children should be warned though that at times Peter Segal does seem to forget that he is directing a family film in 2020. There are times throughout the film where it feels like the film is a throwback to the family action films of the ’80s and ’90s where it was more than acceptable to point a gun at a child actor and throw them head first into action sequences. While those scenes here do add to the surprising realism and believability of the film some parents may wish to be a little cautious when it comes to the age of the children that they are allowing to watch the film.

My Spy is perhaps one of the biggest surprises of 2020. Many may have expected this to be a film that would have made a few people’s Worst Films Of The Year list, but instead it is an action comedy with real heart. Bautista it seems has more acting cred then many would have expected.

In Phuket, as businesses start to reopen after the lifting of many COVID-19 restrictions, while the SF Cinema at Central Festival Phuket shopping mall has yet to reopen, the SF Cinema at Jungceylon in Patong is now screening major movies, including My Spy. The Coliseum cineplex in Phuket Town has also reopened.