PHUKET: A total of 72 baby leatherback turtles hatched and successfully made their way into the sea from a nest on Bang Khwan Beach last night (Dec 18), the Department of Marine and Coastal Resources (DMCR) reported.

environmentwildlifeanimalsmarine
By The Phuket News 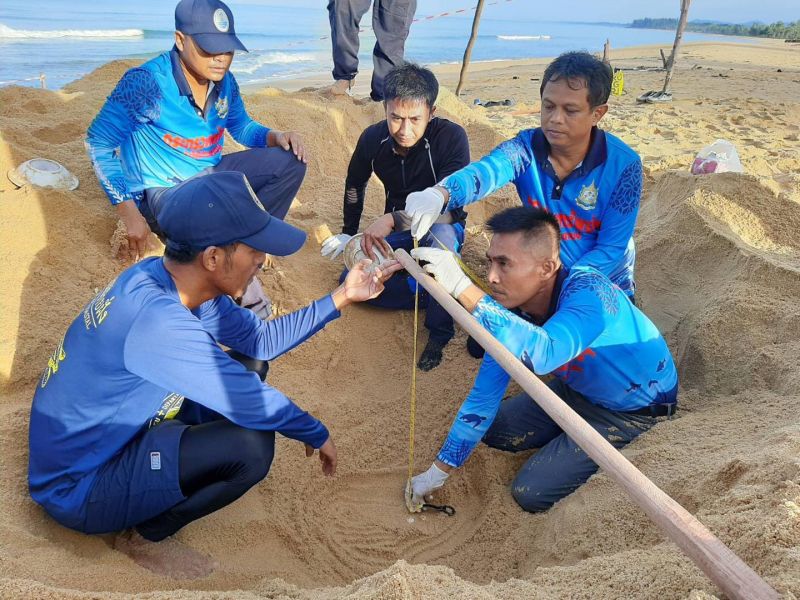 At about 7pm, DMCR officials went to examine the nest on Bang Khwan Beach in Moo 7, Khok Kloi, Phang Nga. The examination came after CCTV surveillance showed that the sand on top of the nest began to go down, indicating the hatching of baby turtles.

According to DMCR, the first baby climbed out of the nest at about 7:30pm and 71 others soon followed.

“Officials examined all the 72 baby turtles and found that they were strong enough. So officials released all of them to the sea,” the report explained.

The information came from local resident Sompong Jitchamnan at about 5:30am. The man discovered traces of a turtle on the beach measuring about 2.2 metres wide. DMCR officials followed the trace and found a nest with 125 eggs in total, 17 eggs of which turned out to be not fertilized.

The nest was taken under protection.