PHUKET: Nai Yang beach witnessed 79 baby turtles hatch from their eggs on Tuesday (Mar 3), with 43 strong enough to be released into the natural environment and 36 still under care observation. One of the turtle eggs at Nai Yang beach is inspected against the light. Photo: DMCR 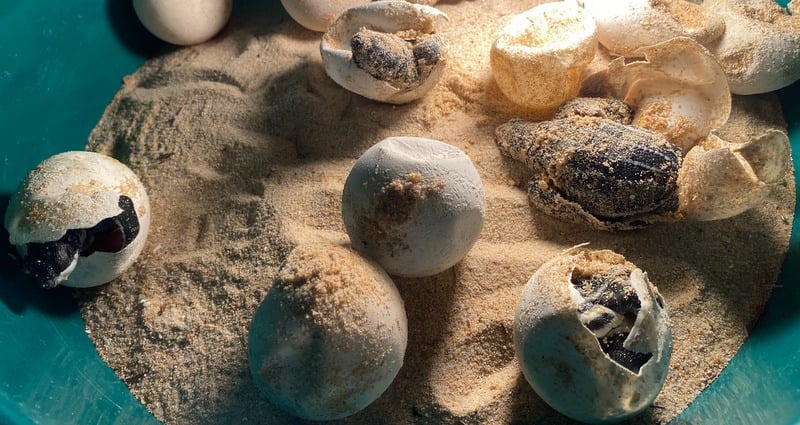 The baby turtles hatching from their eggs. Photo: DMCR Several baby turtles after hatching and prior to being released into the sea. Photo: DMCR Several of the 43 healthy baby turtles make their way to the sea. Photo: DMRC

Officers from the Phuket Marine National Park Operations Center 2 (PMBC) reported that they saw the egg nest was lower than normal, a sign meaning that the eggs was about to hatch.

The first baby turtles climbed up from the nest about 10pm on Nai Yang Beach, in Sakoo.

After the first turtle climbed at around 10pm, 42 others soon followed. The officers waited for approximately two hours then proceeded to help the remaining 36 by digging them out of the sand.

Chief Prarop of PMBC explained that 36 of the hatchlings were very weak and taken into care by PMBC officials to be nursed until they are strong enough to be released to the sea.

“We need to take care of them until their health recovers and for their shells to fully form. This will take about one to two days although we are hopeful we may be able to release seven of these today” Chief Prarop explained.

“Unfortunately, 12 eggs did not form correctly and one died after hatching,” he added.

Mr Prarop informed that the next nest anticipated to hatch in Phuket will be at Sai Kaew Beach. The eggs were laid on Jan 20 and are expected to hatch on Mar 20. (See full story here).

The final nest, laid at Mai Khao Beach on Feb 7, is expected to hatch on April 7. (See full story here).

“If anyone does see a turtle nesting on a local beach, please call us at 076-679134 so we can respond quickly and ensure we can protect the eggs,” Mr Prarop concluded.