PHUKET: A 77-year-old Austrian man has died after the motorbike he was riding collided head-on with a passenger van in Kata last night (Aug 18). The front of the van was heavily damaged by the impact. Photo: Jaobluecar 2299 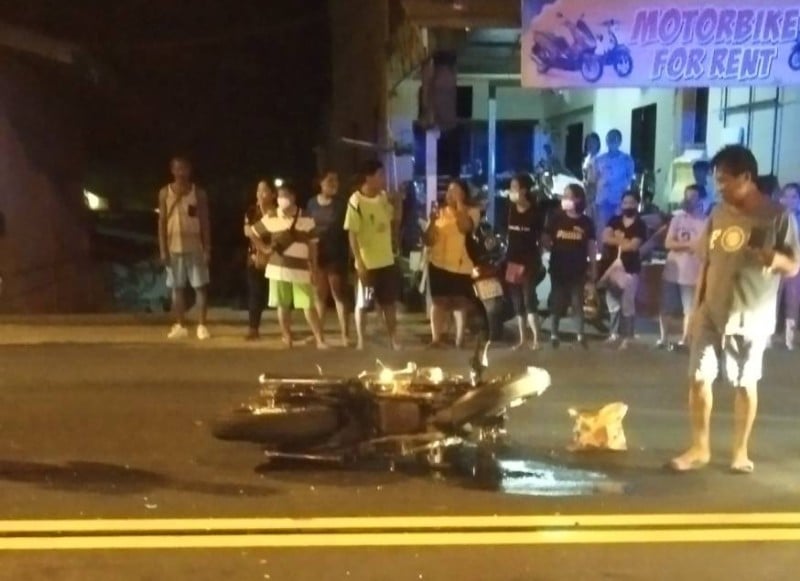 The motorbike was left on the oncoming side of the road. Photo: Jaobluecar 2299 The motorbike was left on the oncoming side of the road. Photo: Eakkapop Thongtub

Capt Channarong Pakrongkeua of the Karon Police reported that police and rescue workers were called to the scene, in front of the Kata branch of the Thai Gold Shop on Patak Rd, at about 7:30pm.

Rescue workers and police arrived at the scene to find a Toyota commercial passenger van with yellow licence plates stopped in the left lane with very heavy damage to its front.

About four metres away was a Honda motorbike registered in Chumphon and two people on the road injured.

One of the injured was identified as a 77-year-old Austrian national*, who was unconscious and unresponsive, Capt Channarong said.

Also on the road unconscious with serious injuries was Kannika Surat, 29, originally from Sakon Nakhon.

However, the Austrian man was pronounced dead on arrival at the hospital, Capt Channarong explained.

Capt Channarong said that according to the police’s initial investigation, the Austrian man was riding the motorbike from Karon towards Kata with Ms Kannika sitting on the back. As the motorbike rounded the curve, it strayed into the oncoming lane and struck the van head-on.

The van driver, 56-year-old Phuket native Wirat Buapri, who was waiting at the scene, said he was unable to avoid the collision.

Police have asked doctors to perform alcohol checks on both Mr Wirat and the Austrian man’s remains. Officers will wait for the results of those tests before proceeding with any legal action, Capt Channarong said.

* The Phuket News is withholding the Austrian man’s name until it has been confirmed that his family have been notified.