Asia snatch victory in series thriller at the ACG

Asia snatch victory in series thriller at the ACG

CRICKET: Incredible scenes last Sunday (Jan. 16) heralded a remarkable win for an Asia select XI against the Rest of the World (ROW) select XI, a result that was decided only on the very last ball after 70 overs of dramatic cricket played out at the ACG in Thalang. Justin Swart in action for ROW during the exciting clash against Asia at the ACG last Sunday. Photo: Neil Quail. Asia’s Imtiyaz Mushtaq raises his bat to acknowledge his half-century against ROW on Sunday at the ACG. Photo: Neil Quail. Imtiyaz Mushtaq thumps another boundary on his way to 93 against ROW on Sunday at the ACG. Photo: Neil Quail. 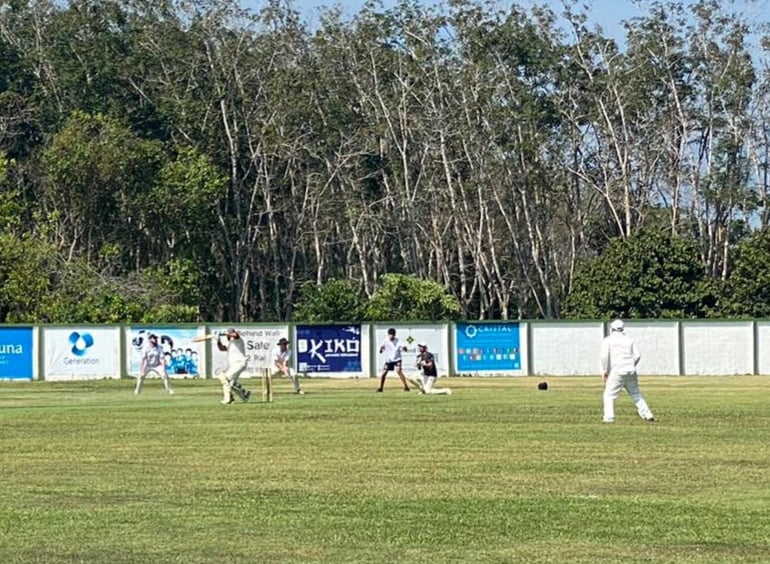 The result affords Asia a 2-1 lead in a five-series event, while ROW will rue the harrowing statistic of 10 dropped catches, eventually costing them the game. Heartbreakingly, several outstanding individual performances that included a Justin Swart century and a Michael Flowers hat-trick were ultimately negated by the ROW fielding debacle.

Returning to captain ROW, Jason Robertson won the toss and elected to bat first in witheringly heated conditions, with the opening pair of Flowers and Jeremy Bootsy promptly given a comfortable start from a Sami Pir loose, nine-run first over.

In contrast, Asia captain Shivam Bhattacharaya then took the ball and pinned Flowers to his crease for a maiden second over, before Bootsy ravaged Pir’s bowling in the third over for 18 runs, including a double brace of fours.

By the 9th over, the ROW partnership was at 71, with Bootsy (40) claiming the lion’s share of the runs, when Waseem Musa intervened to aid in despatching both openers in consecutive balls; first, by catching Bootsy at mid-wicket and then immediately running out Flowers (16) with a superb direct hit off the bowling of Imtiyaz Mushtaq.

Restoring the preferred ROW left-hand and right-hand coupling, Swart and Stuart Hamilton fleshed out 24 more runs before Yassir gobbled up Hamilton off a Pir delivery, allowing the teams to break for drinks in the 15th over with the score on 95 for 3.

After the break, Swart was to produce an immaculate batting display through the remaining 20 overs joined first by Joe Ninan (11), who eventually succumbed to the probing leg-spin of series debutante Zan Coplestone, being caught by Pir at square-leg in the 19th over. Unfortunately for the young Coplestone, his first wicket was subsequently marred by lethargic fielding from his team-mates as three more catching opportunities were put down or missed in that very same over with the score on 125 for 4.

In surviving that over, Dan Nicholson ably assisted Swart in adding 131 more runs to the total, bringing Nicholson a score of 30 not out and Swart his century in the 33rd over, eventually reaching an impressive 108 not out.

Chasing 257 to win, Asia would need to keep in touch with a run-rate of more than seven per over, but an edgy start saw opener Seemant Raju dropped in the slips twice, before redeeming himself in the second over, hoisting two lofty sixes off Swart’s bowling.

Robertson’s next six deliveries reinstated the advantage to ROW by forcing Mushtaq into defensive mode, while securing the ROW skipper a maiden over. And with the first ball of his third over, Robertson finally made a deserved breakthrough when Dom Judge atoned for earlier putting down Raju, coolly clutching the Asia opener at first slip.

Just four balls later Flowers also remedied his failure to dismiss Raju in the second over by collecting the Samir Khan’s looping edge to second slip, with the score on 25 for 2.

As Mushtaq manoeuvred his innings into double figures, ROW’s confounding inability to hold catches returned as Ali Khan reached 28 off 20 deliveries, having been dropped on three and 10, while Mushtaq also breathed a sigh a relief on 9 and later at 63.

Khan’s wicket in the 9th over brought Bhanu Pratap to the middle, and the partnership racked up 109 runs through the next 17 overs to reach 167 for 3.

The very first ball after the 25th over drinks’ break saw the demise of Pratap, falling short of his half-century by six runs as Bootsy again was there to snap up an edge from Flowers’ bowling.

While Mayur Deuskar’s 11 off 12 was ended by that combination of Bootsy’s gloves and good seeds from Flowers’ bowling once again, the Asia batman’s wicket did begin Flowers’ successful harvest of a rare cricketing accolade in achieving a hat-trick in the 30th over.

Waseem Musa’s entry failed to make a mark, being bowled by Flowers on the very next ball, and then new batsman Pir instantly gave Robertson in the covers an opportunity to compensate for dropping Mushtaq in the 6th over, which he did, securing an historic hat-trick for Flowers.

Capitalizing on a mix of powerful shot choices and an element of good fortune, a flagging Mushtaq found himself just seven runs short of his century in the 31st over just as Robertson found the bat’s edge for an inspired Judge to snare Mushtaq at first slip, and the score on 210 for 8.

ROW would have felt relatively assured of victory as Yassir and his skipper Bhattacharaya shouldered the responsibility of chasing down 47 runs off just 26 remaining deliveries.

Shots were fired as Bhattacharaya slammed Ninan for four off his first faced ball, and by the end of over 33, Asia needed exactly 20 runs off 12 balls.

Like men possessed, Bhattacharaya (26 N.O.) and Yassir (25 N.O.) pounded out 10 runs from the 34th over, but a four from the first ball off Swart’s and the game’s last over swung the balance of favour quite astoundingly in Asia’s direction.

Scrambling another five runs through the next four balls left Yassir on strike for the last ball, the scores dead even and the game on a knife’s edge.

As Swart’s final delivery was thrashed out to square leg by Yassir for four runs, the Asia bench cleared onto the pitch to celebrate an extraordinary win, while ROW retired to reflect on a litany of missed opportunities.

An unbeaten 108 not out by Swart, a 93 by Mushtaq were the outstanding batting performances, while Robertson’s 2 for 29 off 7 overs and Flowers’s 4 for 51 off 7 overs, featuring a hat-trick, all added to an exceptional match.

A special mention to both Dom Judge and Zan Coplestone for their excellent bowling (and fielding) contributions, with 38 off 6 overs and 1 for 37 off 7 overs, respectively.

Due to the success and enjoyment of the series, organisers and players have decided to extend it to a best-of-five, ensuring at least one more match, which will take place in February.