Arsenal sack Emery as pressure mounts for under fire managers

Arsenal sack Emery as pressure mounts for under fire managers

FOOTBALL: We may be nearing the festive season but this is no time for goodwill in the pressure cauldron of the Premier League as what is traditionally known as sack season looms 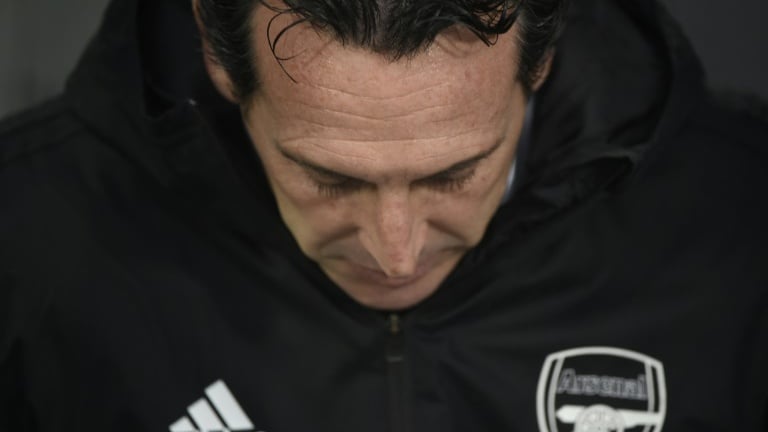 Time up: Unai Emery has lost his job at Arsenal. Photo AFP Marco Silva is flattering to deceive at Everton. Photo AFP Manuel Pellegrini is on the brink at West Ham as their alarming slump continues. Photo AFP.

Emery was arguably heading a queue of managers that have been walking a precarious  tightrope for some time, conscious that pressure had been building to an almost unbearable level in recent weeks.

The home loss to Eintracht Frankfurt in the Europa League on Thursday (Nov 28) seemed to be no more than a formality as the board appeared to have already made their decision to let the Spaniard go.

His time at the Emirates stadium will be remembered as largely uneventful. After a relatively promising first season, when Emery guided the team to a respectable fifth place finish in the league and the final of the Europa league, things started to unravel with less than a third of this campaign gone.

He continually baffled and disappointed with bizarre team selections and an insistence on playing out from the back despite an evident lack of personnel capable of doing so.

He regularly changed team formation and personnel,  resulting in many referencing the “square peg into round holes” syndrome.

His handling of capatin selection and the fallout from the Granit Xhaka affair suggested a man at the helm who wasn't in control.

His team looked bereft of any meaningful ideas at home against struggling Southampton last Saturday (Nov 23) where they limped to a 2-2 draw that left the home faithful underwhelmed and frustrated, evident when a chorus of boos greeted the final whistle; usually this is merely a pre-cursor to the inevitable and so it proved.

In the interim, Arsenal have appointed former player Freddie Ljungberg as temporary head coach. Ljungberg has no prior top level managerial experience, having coached the Arsenal under 23 team for the past year.

Arsenal will be hoping his appointment has the same galvanising effect that Frank Lampard has had at Chelsea although the circumstances are markedly different and Ljungberg is facing a stern test ahead.

His team visit Norwich City on Sunday (Dec 1) in what will be a hugely challenging affair. On paper many would predict an easy ride but, as we well know, this is not a game played on paper and Norwich demonstrated a stubborn resolve by digging deep to win at Everton last weekend with a deserved 2-0 victory.

Buoyed by this result and a partisan home crowd they will ensure an uncomfortable afternoon and a baptism of fire for Ljungberg and his charges.

So, as the managerial spin cycle gains momentum, what other managers are looking nervously over their shoulder desperately hoping not to be dismissal statistic number three of this wildly unpredictable season so far?

Marco Silva, undoubtedly, heads that race and finds himself in a desperate situation at Everton. The home loss to rock bottom Norwich last weekend was a disastrous result and a daunting run of upcoming fixtures against Leicester City, Liverpool, Chelsea and Manchester United suggests the struggle will only be prolonged.

The cacophony of disdain from the home fans at the conclusion of the Norwich debacle was vehement, with passionate calls for the manager’s dismissal all too evident.

A visit to Leicester City is the last thing Silva and his team need. Leicester currently sit second in the table, a position many experts predict they will maintain until season’s end, and are on a sparkling run of form. They boast the league’s top scorer in Jamie Vardy, a hugely creative midfield led by the effervescent James Maddison and the best defensive record in the competition.

Silva has flattered to deceive since assuming the helm at Goodison Park, despite being handsomely backed financially by an ambitious board. Their displays have been erratic and the team regularly appears to lack cohesion or identity.

Seven losses after 13 games tells its own story – the fact three of these have been against the newly promoted teams explains why they sit perilously close to the trapdoor and are in desperate need for a change of fortune.

One place below them in the table sit a beleaguered West Ham United. They possess the worst current form in the league having picked up only two points from the last 21 available. The fact that they sat in second place in late September further demonstrates their alarming plight.

Losing their first choice goalkeeper Lukasz Fabianski to injury certainly has not helped matters as his replacement, the Spaniard Roberto Jiménez, has proven a very nervy deputy, delivering a series of very unconvincing displays that seems to have eroded what little remaining confidence his defence in front of him possessed.

At the other end of the pitch they are also struggling with a very meek attacking line finding it extremely difficult to create, let alone score, chances.

The manager Manuel Pellegrini always carries a cool, assured manner and never seems one for panic. He has vast experience having managed successfully at the highest level with clubs like Real Madrid and Manchester City and states that after 30 years he has faith in his methods and is not worried.

However, his calm demeanour surely belies a sense of genuine concern as the situation continues to deteriorate and shows no signs of improving.

Many critics observed how the team seemingly gave up after conceding the first goal in their 2-3 loss against Tottenham last Saturday (Nov 23), a worrying sign that morale, confidence and belief have all but disappeared.

Next up is the short trip across London to visit an in form Chelsea side who have been mightily impressive this season under former player Frank Lampard and his policy of trusting youth.

Chelsea are playing with flair, creativity and a lack of fear and it will be a sharp test for The Hammers and their brittle confidence.

The owners at West Ham are famously loyal to their managers although another loss could well see Pellegrini bowing down to the exit sign at the London Stadium.