THAILAND: The government yesterday (Feb 15) pushed back the deadline for those without internet access to register for the “Rao Chana” aid scheme from Feb 25 to March 5th after commotions were reported across the country on the first day of in-person applications. 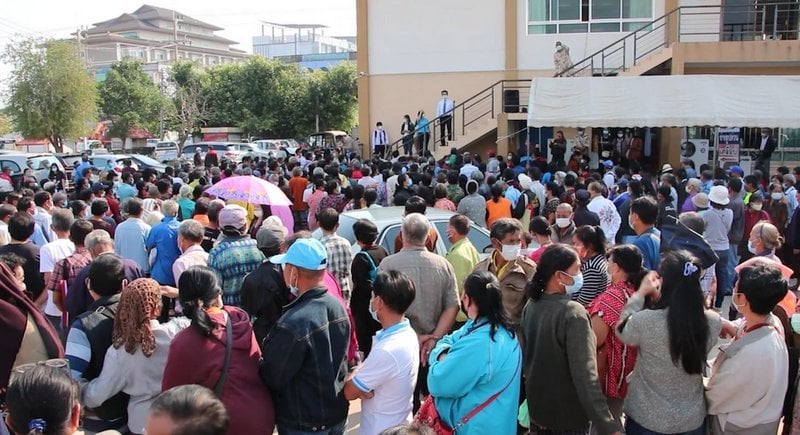 Hundreds of people wait in Muang district, Khon Kaen, yesterday to register for financial aid under the Rao Chana scheme. It was the first day that those without smartphones or internet access were able to register with their ID cards, but many left empty-handed after seeing the long queues in front of them. Photo: Chakrapan Natanri.

“Please come and register on other days because there is still plenty of time. We are going to extend the deadline to make sure all who are entitled can register,” the prime minister said after a first day many described as “havoc”.

“Today’s disarray was because a lot of people turned up to register and there are a lot of documents that must be processed,” he told the media.

It was the first day that people without internet access wee able to sign up for the “We Win” scheme at branches of Krungthai Bank and designated government processing facilities.

Under the scheme, the government has pledged to supplement the income of 31 million people earning less than B300,000 a year by B7,000 spread over two months.

The first lot of registrations for people using smart phones was started and completed between Jan 29-Feb 12. The registration yesterday was for those without mobile phones and those with special needs and disabilities.

At one Krungthai Bank branch in Phayao province, more than a thousand mostly elderly residents turned up hoping for what turned out to be just 100 available appointments for the day. Frustration soon turned to outright anger and a number of verbal confrontations with staff and among those queuing were reported.

For those unable to turn up in person, deputy government spokeswoman Rachada Dhnadirek said the government will do its best to help people with disabilities register for the scheme.

She said Krungthai Bank will send mobile units to communities while people with disabilities and bed-ridden patients can delegate registration to family members.

In another development, the cabinet yesterday approved a financial relief package scheme for private employees covered by Section 33 of the Social Security Act (SSA) with registration set to begin on Feb 21.

Labour Minister Suchart Chomklin said registration for Mor33 Rao Rak Kan (Section 33 We Love One Another), would run from Feb 21-March 7 with approved applicants required to confirm via the Pao Tang app between March 15–21.

Those qualified to receive the financial aid will get a B4,000 subsidy via the app followed by B1,000 weekly from March 22-April 12.

The eligibility criteria include having deposits in a bank account not exceeding B500,000 as of December 2019.