PHUKET: Stepping inside Gitano Restaurant & Love in Cherng Talay is like stepping back decades to your childhood. 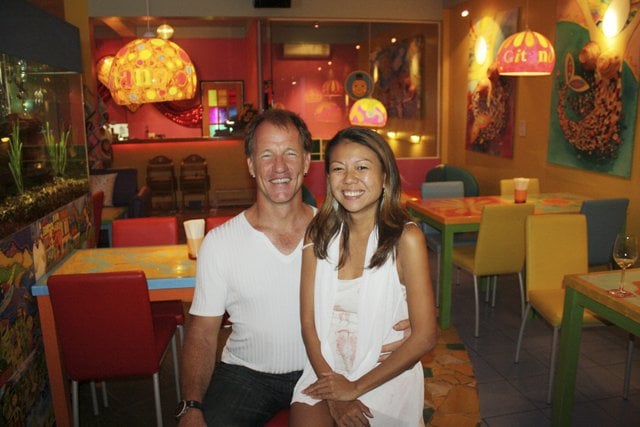 The interior of the restaurant is decked out in brightly coloured furniture with hand-painted lamps and floor. On the walls are bold acrylic paintings by co-owner Miguel Kirjon.

Miguel and partner Lin Prachakrich opened their Pa Khlok restaurant in 2009 and the Cherng Talay branch followed seven months ago. Both serve Mexican and Thai cuisine.

The restaurants are indeed a labour of love, as the name might suggest. The couple spent hours decorating the interior and hand-painting the lights, and a large mural which adorns the wall of the children’s play area.

Lin manages both restaurants while Miguel works full-time as director of branding for Twinpalms.

Miguel, of Finnish and German descent but raised in Colombia, met Lin, who is Thai-Chinese, while they were both teaching at what was then Dulwich International College, now the British International School.

The couple’s children, Valentine, 11, Vivaldi, 3 and Vanjelis, 1, have been integral in the way the restaurant is shaped today.

When they opened Gitano Restaurant & Love, it was with the idea that their children, and children in general, could be part of the fun.

Both restaurants are very family friendly, with a special room for kids to go wild, and a popular branch of their business is holding children’s parties, complete with specially designed games.

Also making people happy is the food, which is reasonably priced and all made fresh on the day.

Lin’s Mexican food is low-carb, and nearly everything on the menu can be made vegetarian. Highlights include the quesadilla (B190), and fajitas (B190).

A must-try is Lin’s home made Mexican sauce, which tourists have been known to buy and take home to their own countries.

On the Thai menu, signature dishes include the penang curry (B150), which Lin says is a cross between massaman and penang because she uses peanut powder.

The salmon steak with lime juice (B210) is also delicious.

If you’re having a bad day, lunch or dinner at Gitano is guaranteed to make you smile.
Gitanolove.com, 081-892-2419 (Lin) or email lin@gitanolove.com