If Zack Blackmon Jr were to tell you that he’s a direct descendant of the original Siamese Twins Eng and Chang Bunker, there’s no way you’d believe him. White skinned, blue eyed and with a delightfully thick North Carolinian accent, Blackmon Jr, 67, is in fact the great-great grandson of Eng. 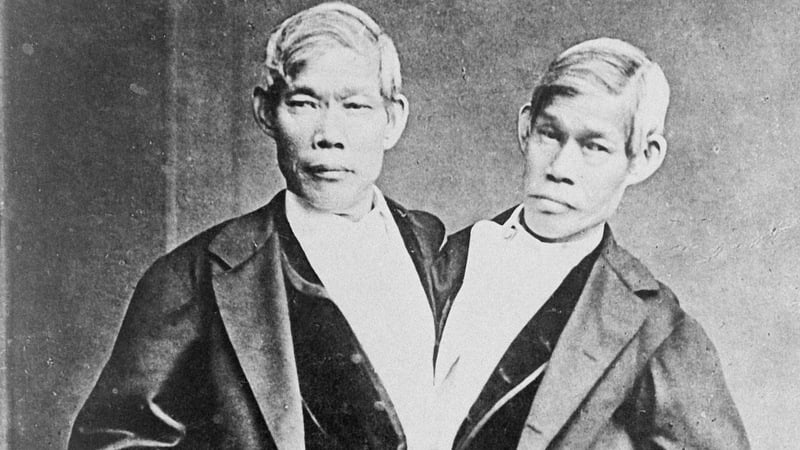 A family gathering captured and named for posterity. Fourth- and fifth-generation descendants of the original Siamese Twins visit their ancestor’s statue in their hometown of Muang, Samut Songkhram. Photo: Ministry of Foreign Affairs “One of the comical things is when people look at me and say, ‘Which one are you kin to?’. I always say Eng, and they say, ‘How do you know?’, and you can’t help but think, ‘Well, Chang was there’, he said with a laugh.

Jokes aside, last week marked an important step forward for the Bunker family descendants as well as Thai-American diplomatic relations. Blackmon Jr and 13 other fourth-and fifth-generation descendants of the original Siamese Twins came on a 10-day official trip from America to visit their ancestor’s homeland of Thailand.

The event, sparked by a viral Matichon article by Gen Nipat Thonglek on the twin’s unbelievable story, was co-hosted by the Ministry of Foreign Affairs of Thailand as part of the 185th anniversary of Thai-American relations. Touring Samut Songkhram, the birthplace of their great or great-great grandparents’ the descendants, with tears of joy in their eyes, celebrated the twins 207th birthday with a traditional Buddhist ceremony, planted an Inchan tree (Gold Apple tree) in front of their bronze statue and also unveiled a new street named Chang and Eng near the statue.

“The ‘Elephant and the Eagle’, which is the Thai and American relationship – a lot of that was created back with Eng and Chang,” said Blackmon Jr, who was on his first trip to Thailand. “They sort of helped start the relationship, and it’s is getting stronger.”

Eng and Chang were born in Siam in 1811 to Chinese parents. Conjoined at the chest by a band of cartilage as well as a fused liver, they were discovered by a Scottish businessman and an American captain at the age of 17. The twins were contracted into their service for five years (paying their mother an equivalent of US$500 and asking permission from King Rama II), but for more than a decade, they toured the world in circuses, freak-shows and hospitals to be poked and prodded, exhibited and gawked at as “monstrosities”.

Known for their high intelligence and wit, by 1832, the twins were able to collect enough money to free themselves and settle down in the southern comforts of Mt Airy, North Carolina, as some of the richest men in the county – even owning 33 slaves. Using loopholes in the law (they were considered white by census as the official government didn’t have a category for Asians until 1870), they became US citizens, married two white sisters – Adelaide and Sarah Yates – and to the fascination of everyone from then till now, fathered in total 21 children.

Today, there are about 1,500 descendants of the Siamese Twins (with around seven sets of non-conjoined twins), and the fourth and fifth generations especially take high pride in their ancestry.

“With their unusual bondage, they not only survived, but they thrived,” said Blackmon Jr, who himself had fathered twins. “You can look down the generations and there’s generals in the army, there’s a president of the Union Pacific Railroad, and there’s Alex Sink, a [former chief financial officer of Florida] who also ran for governor.”

“From their generation down, all their children were hardworking and became fairly well-to-do. They encouraged their children to go to school, to go to college, and that sort of went down the generations. We wouldn’t have had the start and push we had. It had to start somewhere. We applaud them.”

The descendants take their lineage so seriously that for the past 28 years, they have been having family reunions in Mt Airy every last Saturday of May. Hundreds of descendants would gather together, do a roll call (each descendant has their own code), find out more about the history and information about the twins, and eat Thai food provided by the Embassy of Thailand – a friendship which has been going on for the last 10 years.

“My grandmother didn’t talk about the twins very much. I think she was embarrassed,” said Chang’s great-great granddaughter Alex Sink, who actually grew up in Chang’s farmhouse in Mt Airy. “Nobody wanted to talk about the sex. They had a lot of children. They did something [laughs]. But that human desire to produce children and to have families was just very strong, and fortunately they found two sisters that fell in love with them. It's a good family story.”

“When I was growing up, sometimes I heard them being called circus freaks,” said Sink. “They were oddities – they were one-of-a-kind. Nobody had ever seen anybody like this, and they were Asian. They were very exotic, and the misconception is you start thinking that they're not real people with real feelings, emotions, intelligence and talents. As soon as they could, they knew they wanted to settle down and live a normal life.”