CYCLING: The Tour de France should have embarked from the Mediterranean city of Nice this weekend, but the two-month coronavirus delay will heighten the drama on a “unique edition”, race organiser Christian Prudhomme has told AFP. 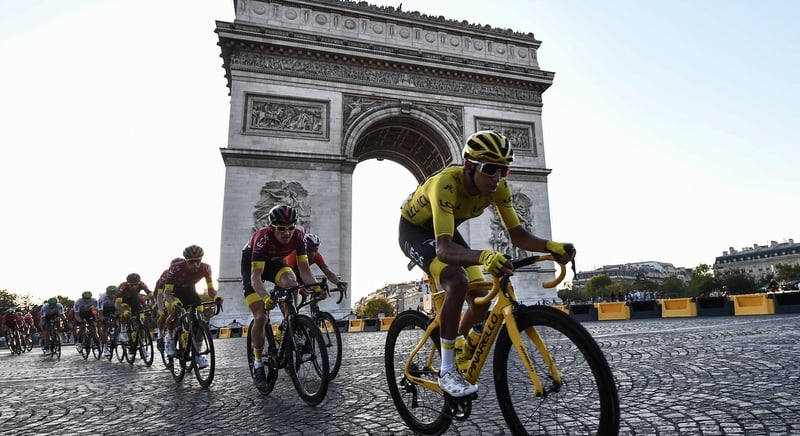 The epic 107th edition will now embark from Nice’s celebrated Promenade des Anglais on August 29 and culminate with a dash around Paris’ cobbled Champs Elysees on September 20. Photo: AFP

The breathtaking vistas, raucous pop-up campervan villages straddling mountain summit finishes and charming French chateaux will all still be on the menu for global television audiences, as will the party atmosphere for the millions of roadside fans when the race starts at the end of August.

While the French custom of kissing in greeting will be barred, and social distancing still practiced, the delay has shaken up the format adding a dose of the unknown to an already cut-throat three-week race.

Proof of the race’s domestic popularity can be detected in the fact that France put a swift end to its rugby and football seasons, but the general and political will to go on with the cycling saw the Tour survive.

The epic 107th edition will now embark from Nice’s celebrated Promenade des Anglais on August 29 and culminate with a dash around Paris’ cobbled Champs Elysees on September 20.

“It will be as singular as it will be unique,” Prudhomme promises of what was already a mouthwatering route through France’s five mountain ranges.

“A Tour has never embarked so late in the year. It’s still in summer, but outside the school holidays,” says Prudhomme, who feels there may be fewer than the usually expected 12 million roadside fans.

“The heat should be less intense,” he says of the sizzling temperatures that facilitate the roadside and hilltop carnival atmosphere in July.

“There will be more wind too,” he says, adding to the chaos the crosswinds cause on the race through some of France’s vast wheat plains, that will have long since been harvested.

“There will be fewer fans, but it will still be a party,” he says.

The coronavirus has hit advertising and Prudhomme said that the publicity caravan which precedes the passage of the race, throwing goodies to crowds who gather not only for a fleeting glimpse of the peloton, but also the possibility of caps, shirts, sweets and other free promotional gifts, will be 40% smaller.

The season shake up has put even more focus on the Tour this year and every big gun in the armoury is being primed for Le Grande Boucle.

Team Ineos should line up with the last three winners in Chris Froome, Geraint Thomas and Egan Bernal as co-captains.

Defending champion Bernal is training in his homeland where he told local media he was out to win.

“If I’m in a position to win I won’t sacrifice my chances,” the 23-year-old Colombian said, reportedly sparking Froome’s anger and reports he was about to switch teams.

This could all be a smoke and mirrors strategy to take the heat off Bernal, and Ineos’ chief rival Jumbo has also named three co-captains.

Some would say that the fact the Tour will even be raced is a victory in itself and after the BBQs and beers across the five mountain ranges of the Alps, the Massif Central, the Pyrenees, the Jura and the Vosges the winner will emerge at the wonderfully named ‘La Planche des Belles Filles’ (bench of beautiful girls).

Back in October, Bernal’s jaw dropped as the challenging route’s finale was unveiled, while beside him four-time champion Froome let a smile slip, seeing the scene of his narrow 2012 triumph atop the steep summit which this year plays host to a penultimate day individual time-trial.

Whoever emerges from the sunflowers and the chateaux wearing the yellow jersey atop La Planche des Belles Filles, he will have won one of the most hotly anticipated Tours in its 107 year history.