PHUKET: A blonde Australian teenager lies outstretched on the leg of a sleeping tiger. Pim and Tony with tigers at the Tiger Kingdom. 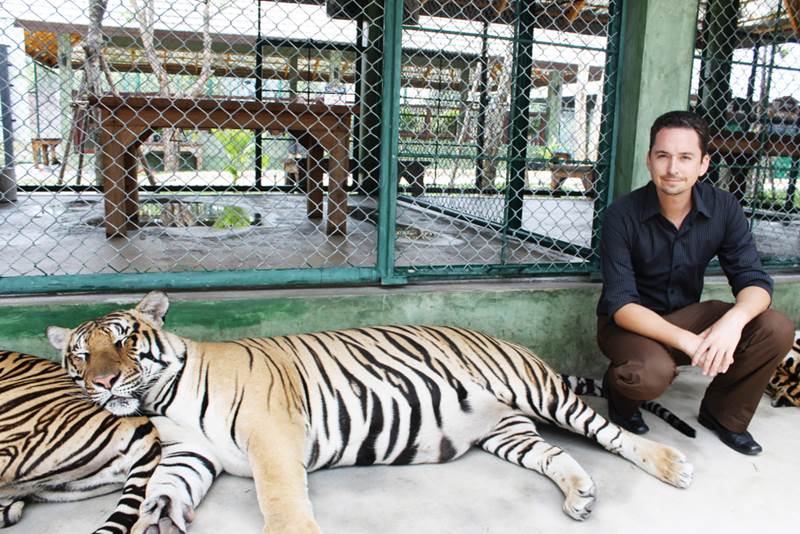 Sub editor Jody Houton with tigers at the Tiger Kingdom. The girl’s mother is watching – and ooohing and ahhhing – from the safety of the exterior of the fenced off area at the newly opened Tiger Kingdom.

Every time her daughter rearranges her body for the onsite photographer to take another picture, she shrieks words of encouragement, and her admiration for the beautiful, docile ‘big cats’.

Despite this, however, mother Kath watches Holly, both from Adelaide, from behind the electric fence that separates the paying guests and prowling tigers at Phuket’s latest ‘attraction’.

"I know they are hand reared and ‘trained’," says Kath, clearly uncomfortable about using the word, "but I wouldn’t be in there with the bigger ones – maybe the cubs, but not the bigger ones – but it’s something Holly always wanted to do."

It’s obviously something that many want to do, as despite being open for just a week when The Phuket News visited, the centre was full of tourists.

Looking out at the relatively small caged enclosure, it’s rather odd, fascinating and just a little bit scary to see these huge wild animals so close to smiling and unsuspecting humans.

Rumours abound that certain tiger centres in Thailand drug the animals in order to make them placid, combined with allegations of unethical animal mistreatment, and cruel feeding time antics. These are suspicions that Pim, chief customer relations officer for the Chiang Mai branch of Tiger Kingdom, explains are natural, but completely untrue.

"Many people have this idea [that animals are drugged], but it’s not true. The tigers are not drugged."

Pim explains that the tigers’ amiable nature is instead down to them being reared by humans from a young age. Essentially, they are tame.

"They’re like any domesticated animal. People think how can they go in there and the tigers not attack and try to eat them? They think the animals are wild, so they can’t go in there and touch them."

The rather Disney-fied story of Thailand’s Tiger Kingdom (the Phuket branch is technically the third) began in the early eighties.

"Our owner was given a baby tiger 30 years ago in Ratchaburi, in central Thailand, because its mother had been killed by hunters in the wild," says Pim.

"A villager gave it to him because he had land and money and could take care of the animal. It all started from there really. As he got more animals he needed to make money in order to get more land and care for the tigers."

The land where that original ‘rescue centre’ stood in Ratchaburi is now a zoo, home to many wild animals. The first dedicated Tiger Kingdom was opened in Chiang Mai in 2008 and is now home to 53 tigers, although when it first opened, it was more of a conventional type of zoo, where visitors’ contact with tigers was non-existent.

"At first, the tigers were in cages like regular zoos and it was actually some Australian visitors who asked if they could get closer to the animals, much like the trainers were doing."

Ever since then, getting up close and personal with tigers has become part of the Thai tiger tourist experience. An experience that Ashley Fruno, senior campaigner at PETA Asia, believes is wrong.

"Most tigers in attractions like these live out their life sentence in prison-like cages, leaving these majestic and powerful creatures without any space to move and run in," says Mr Fruno.

Although the young tigers are allowed out of their cage during the day – often to have their photos taken – there is not very much room to run around in, and trainers are always on hand, complete with bamboo sticks, to moderate tigers’ behaviour if they get too ‘wild’.

The older tigers, however, are not allowed such, albeit monitored and restricted, freedoms.

"When a tiger gets to around 2 to 3 years old they are taken and put in a separate cage, because they can’t be around other tigers. They would start fighting and want to protect their area," explains Pim.

When a tiger matures in the Tiger Kingdom therefore, his or her life is either resigned to being part of a breeding programme or kept in complete isolation in a cage for 24 hours a day for the rest of their life.

"What else can we do though?" asks Pim, "We can’t release them into the wild. The truth is there is no income and no provisions to take care of them otherwise, so we need to do this."

Born to be wild

Pim tells The Phuket News that the most ideal situation would be to have a foreign sponsor that is able to provide financial aid to help realise the Tiger Kingdom’s ultimate aim of opening a retirement community for tigers, much like Sangduen ‘Lek’ Chailert did for elephants in Chiang Mai. As this is likely years away from becoming reality though, Pim explains they are doing the best they can.

The view that they’re making the best of a bad situation and actually helping save tigers from almost certain extinction is shared by many who visit such centres across Thailand, though not all.

Onkuri Majumdar is the South Asia regional coordinator of Freeland, a Thailand-registered NGO concerned with preserving and protecting wildlife around the world.

Mrs Onkuri believes that this view is misleading and actually quite irresponsible, “Zoo tigers do nothing to save wild tigers. Zoo tigers can never be released into the wild because – contrary to popular belief – successful hunting isn’t an instinct.

"It is a highly specialised skill which is taught by a mother to her cubs, which humans cannot do."

She says that cubs born in captivity will never learn how to hunt because they are typically taken from their mothers at just three weeks of age.

There are certainly issues of ethics and cruelty at play at tiger centres catering to tourists. Another is the illegal trading of tigers and although there is no evidence of such activity at the Tiger Kingdom, Mrs Onkuri warns that this criminal activity happens all too often.

"Unless strictly monitored, private zoos serve as a conduit to illegally selling cubs and adults for consumption into the illegal wildlife trade."

Tiger Kingdom is not government funded, but it is government monitored. Each tiger born in captivity in Thailand is required to be registered and implanted with a chip so that they may be monitored by the Department of National Parks, Wildlife and Plant Conservation (DNP). However, in this regard, zoos can legally own tigers.

Tiger registration is to prevent illegal trading and trafficking. Loopholes do exist in the law however, which allows for certain movements between different zoos. Representatives from the DNP therefore make regular trips to zoos and animal centres to make sure everything is above board and if not, they regularly raid and confiscate unregistered animals. The problem is that once confiscated, as tigers cannot be released into the wild, they are often doomed to live out their lives in captivity at the DNP in conditions that are far from ideal.

Thailand has more than 50 protected wildlife sanctuaries that account for nearly 10 per cent of the country’s surface area however unscrupulous traders sometimes outnumber rangers in these parks.

Both Mr Fruno and Mrs Onkuri therefore believe that more focus should be put on combating the reasons why the trafficking and trading of tigers, and other animals, is allowed to continue.

"Thailand needs to enhance resources for rangers who are protecting wild tigers and investigators who are trying to stop wildlife crime syndicates," says Mrs Onkuri.

"They should also strictly ensure that identified wildlife trafficking syndicate heads do not receive political or official protection."

"At the least, private zoos can remind viewers that such a species does exist in the wild, and help fundraise money for wild tiger conservation projects."

The most obvious question then is although ‘wild’ animals, such as tigers, crocodiles and elephants, can be trained to perform in shows, can they ever be truly tamed? And should they be?

Last month a trainer at a crocodile farm in Samut Prakan required 30 stitches to his face, after, as part of an act, he put his head in a crocodile’s mouth and was bitten.

A tiger handler was mauled and killed at the South Lakes Wild Animal Park in the United Kingdom in May of this year, though it should be noted that the tiger was fully grown and not born in captivity.

"I don’t know how they train them," says Pim of the incident, "But we have lots of rules that the trainers have to follow."

Tony, like Pim, came down from Chiang Mai to Phuket. His job is to oversee operations and train both the resident tigers (19) and trainers (20), eight of whom are from Chiang Mai, with 12 staff recruited in Phuket.

"Before trainers work with the tigers, they have to learn how to ‘read’ a tiger and recognise when it is angry. They will pin their ears back, hiss and want to be left alone and not be with any other tigers. This is when trainers should stay away from them," says Tony.

"The relationship [of a tiger and its trainer] is similar to that of mahout and elephant, but it’s more about a general understanding. It’s important to make a relationship with the tiger but it needs to be across the board and with different trainers and tigers.

"Each trainer is given a small bamboo stick which is used to control the tiger. If they behave badly they will be drubbed on the nose," Tony explains.

"This is how they are trained when they are very young. The stick is only used for bad behaviour, but they are retrained every morning before the tourists come in."

Tony explained that it is also important to have a distinction between how the trainers and tourists interact with the animals.

"The trainers need to be in control, so they can’t hug the tigers or show too much affection. If there’s not a distinction and a tourist gets into trouble they will not know how to control the animal."

Tony clearly loves his tigers, and is passionate and hopeful that the residential home for ‘retired’ tigers is built one day.

As it stands now, however, the future of the Thai tiger is in a precarious state. Bred in captivity or born in the wild, they risk a life where they are either caught and killed, or bred and caged.

Unless correct provisions are made by the Thai government to protect wildlife and their habitats, unless it ensures that penalties for illegal wildlife trafficking are swift, harsh and consistent, then retirement homes for tigers who have worked in the tourist trade may be the only hope that the Thai tiger has.

It’s a perilous picture – no matter which way you look at it.