In June this year, Louise Rogerson and Russell Withers were in a cold and inevitably rainy England, mulling over their options after a circuit of Asia scouting out locations for a new elephant sanctuary, when the phone rang. The beauty of Tree Tops is that the elephants are in charge. Photo: Russell Withers 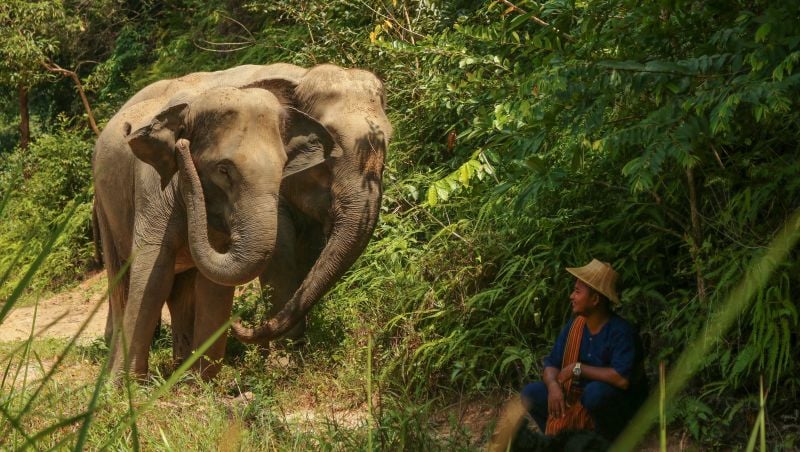 44-year-old Boon Song has been retired from the logging industry. Photo: Russell Withers

On the line was tourism industry veteran and former Executive Director of Phuket Deep Sea Port Wallop P. Luengdhama with a proposition: how about a sanctuary in the hills of Chalong to cater to those seeking an ethical elephant experience in the south?

Wallop certainly picked the right people for the job. Louise has worked with captive elephants in Thailand and Cambodia for over a decade, successfully spear­heading campaigns for their welfare and release as well as setting up the Elephant Asia Rescue and Sur­vival (EARS) Foundation. And both Louise and Rus­sell were vital in setting up Phuket Elephant Sanctu­ary back in 2016, the island’s first genuine “hands-off” elephant project.

Within days of the phone call, the pair were back on the island, sleeves rolled up and ready for round two. Over the next five months, Wallop, Louise and Russell worked tirelessly to set up Tree Tops Elephant Reserve, and what they’ve created is something quite magical, something with the potential to shake up Phuket’s elephant tourism industry entirely.

Given the misuse and overuse of the term “sanctu­ary”, the team settled on “reserve”. But Tree Tops is both a reserve – a protected area for wildlife – and, in the truest sense of the word, a sanctuary – a place of refuge and safety. The seven elephants here have been retired from years of hard work hauling timber in the logging industry, giving rides to tourists or performing tricks at tourist attractions.

Tree Tops is located on a rocky side road at the far end of Chalong Dam and backs out onto 50 rai of lush, rugged grassland and muddy wallows where the elephants roam, socialise, bathe and play freely. Egrets and eagles fly overhead, and the resident dogs play at our ankles as we pull on our wellies and set off on a morning tour of the reserve.

We start with a brief feeding interaction with nine-year-old Fah Sai, who scoops up bananas with her inquisitive trunk like they’re going out of fashion, and her 50-year-old adoptive mother Nam Gaew who watches carefully over her. Potassium levels peaked, the elephants lead us through the forest and into their great green stomping ground.

And herein lies the beauty of Tree Tops: the elephants are in charge. Wherever they go, we go, following and watching from a respectful distance at all times. Their gentle pace has an almost meditative effect on the group; we’re near silent, thoughts fixed only on the environment around us, captivated by these gentle giants.

Thatched-roof salas are dotted across the land, act­ing as viewpoints from which we watch Lam Poon and Tong Tip investigate a particularly luscious patch of foliage, Boon Song break up tough clumps of pineapple grass by thrashing them across her legs, and 65-year-old Nam Sook, affectionately known as “grandma”, stroll slowly through the grass in the distance.

And then there’s an almighty splash. The group turns to see that playful Fah Sai has decided to take a dip with Nam Gaew in a muddy pool which an over­night storm has filled to the brim. Fah Sai slaps the surface with her trunk and trumpets excitedly while Nam Gaew rubs up against the bank, turning her grey skin brown with clay.

Witnessing the natural behaviours these animals exhibit when they’re given the freedom and the space to do so, it’s a wonder that anyone would opt for the wholly unnatural experiences of riding or bathing with them. Simply being in the presence of these mag­nificent animals is enough.

As we settle in for a buffet lunch with the elephants still nearby, Louise and Russell explain that, before Tree Tops, the land and elephants were in fact used as part of a riding camp. Much of Louise, Russell and Wallop’s work has been retraining the owners, guides and mahouts as they make the transition to ethical tourism. While they were on board with this shift, they had their reservations. Won’t the elephants go on a rampage if they’re uncontrolled? Is it safe? Will tourists be interested in this experience?

These concerns dissipated as they saw the ele­phants relax, roam, swim, play, trumpet and socialise in ways they’d never witnessed before. The mahouts’ job now is simply to feed and care for the elephants, and it’s clear that they relish their less interfering role as they line up at the water’s edge next to our group, laughing as the elephants make muddy work of their morning swim.

Tree Tops is more than a sanctuary and reserve; it’s a shining example that change is possible.