Two arrested for snatch and grab theft in Phuket

Two arrested for snatch and grab theft in Phuket 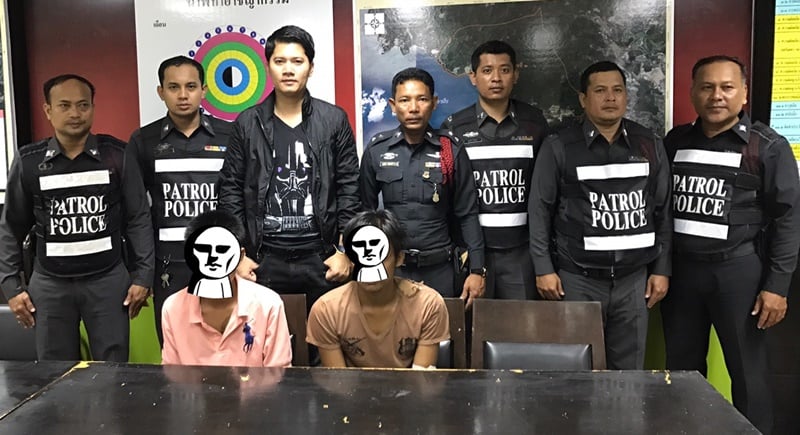 Sarawuth and Tharawuth admitted to the theft and have been charged with theft at night using a getaway vehicle. Photo: Patong police

At around 8:30pm last night, Patong Police under the command of Police Chief Col Chaiwat Uikum arrested Sarawuth Rattanaprasert, 21, and Tharawuth Hirankhakorn, 19, who were found to be in possession of a stolen iPhone 6.

Police seized the iPhone 6 together with a Trang registered Honda Wave as evidence of the crime.

In a press release issued by police it was stated that patrol officers were alerted of a snatch and grab incident on Sai Namyen Rd at 7:15pm.

They told police that three people on a motorbike drove next to them and suddenly one of the passengers snatched the iPhone from MsYu’s hand which caused them to crash and collide into another motorbike belong to Ms Wassana Sareepae.

Ms Yu suffered an injury on her knee, Mr Jiang injuries to his knee and right foot, and Ms Wassana an injury to her right arm.

Ms Yu and Mr Jaing were taken to Patong Hospital while Ms Wassana was taken to Vachira Phuket Hospital.

Police said that they quickly apprehended Mr Sarawuth on Sai Namyen Rd, however, the other two suspects made their escape towards 200 Pi Rd.

Police later apprehend the two escaped suspects, Tharawuth and Armin Longklang, as they were driving against the flow of traffic Sawasdirak Rd.

Tharawuth told police in a statement that Armin, who was sat in the middle, had no part in the theft and had actually told them not to commit the theft.

However, Sarawuth and Tharawuth admitted to the theft and have been charged with theft at night using a getaway vehicle.