PHUKET: The Nine Wine and Dining restaurant in Kathu will host celebrity Iron Chef Thailand winner Songwut “Sean” Sumala once a month, where he will create a special set dinner menu. 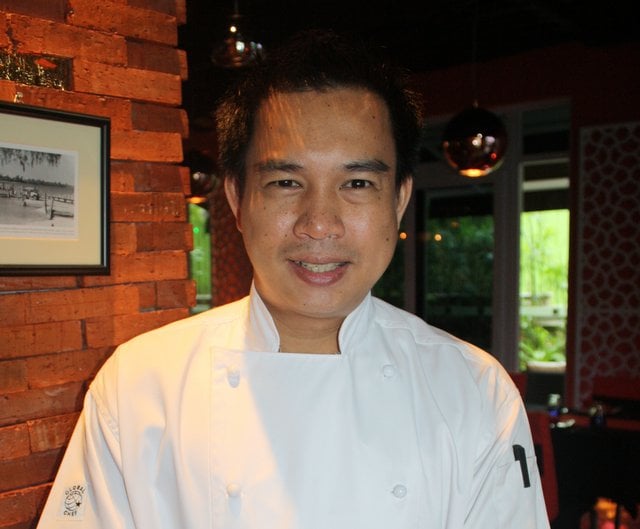 Songwut “Sean” Sumala from the Iron Chef Thailand television cooking show will visit the Nine restaurant once a month to put on a special dinner menu.

Mr Songwut was in Phuket last week for a three-day visit. A former resident of Lampang, Mr Songwut was originally an office worker in a shipping company before he moved to Sydney, Australia to study.

There, he began working in a restaurant as a kitchen hand, and eventually moved up to become sous chef. He spent 10 years living in Australia before returning to Thailand.

Upon his return, Mr Songwut spent three years working in Phuket, including one year as a sous chef at Anantara. He then travelled and worked in Pattaya and Bangkok before auditioning for the hit television show, Iron Chef Thailand.

He was on television in January this year, where he was declared the winner of the “Italian Twist” episode after defeating fellow competitor, Chef Noom, with an impressive egg dish.

These days, when he’s not starring on television he works as the executive chef at Centra Central Station Bangkok. While at the Nine in Phuket last week, Mr Songwut cooked a six-course set menu, which included oysters, a starter option of either calamari or scallop, garden salad, pumpkin soup, a main course option of either pan-roasted seabass or grilled lamb loin, and two dessert options, priced at B999.

Mr Songwut will return to Phuket in late March for another special menu, this time titled “Rustic and Art Nouveau”. The date of his return has not been confirmed, so for more details follow the Nine’s Facebook page (The NINE Wine & Dining) or visit their website.

The Nine Wine & Dining opened late last year is a Sino-modern restaurant offering a wide range of fusion food, European food, Thai food, seafood and baked goods. Their beverage menu is extensive and all dishes are made from fresh ingredients.

The Nine Wine and Dining, 1/F, The Royal Place Condominium (by the Tesco Lotus junction in Kathu). Open daily 11am to midnight (kitchen closes 10pm); 088 831 3881; facebook.com/theninewineanddining; theninewineanddining.com (Thai language only).