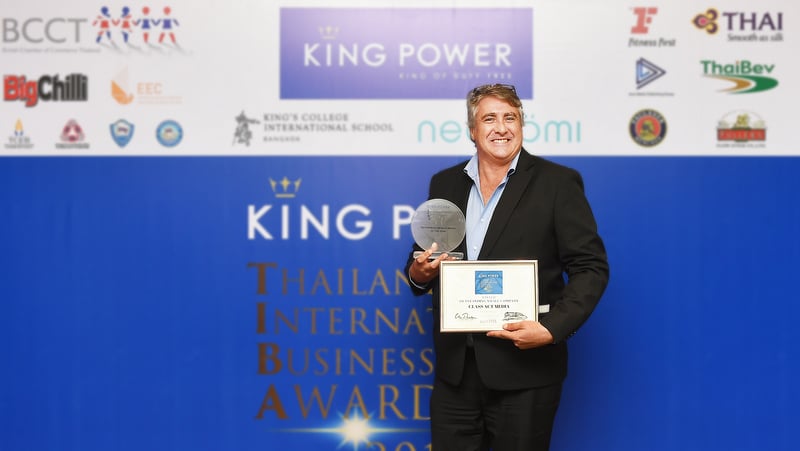 “A fabulous night was had by all who attended the event which attracted an extremely high quality of entries. TIBA serves as platform to present Thailand’s most successful and dynamic businesses and entrepreneurs,” said the awards’ main organisers, the British Chamber of Commerce in Thaiand (BCCT).

The awards were held by the BCCT in collaboration with The BigChilli, Eastern Economic Corridor (EEC), The Federation of Thai Industries (FTI), Thailand Convention and Exhibition Bureau (TCEB) and Thai Chamber of Commerce and Board of Trade of Thailand (BOT).

Class Act Media General Manager Jason Beavan was simple in his message of gratitude in winning the award.

“All of us here at Class Act Media and IMAGE Asia would like to thank everyone for their support in helping Class Act Media being bestowed the Outstanding Small Company Award at the King Power Thailand International Business Awards 2019,” he said.

The other two finalists in the category were Hughes Krupica and R.W.T. International Law Office Co Ltd.

Asked what did Class Act Media did that convinced judges that the company deserved the award, the BCCT responded, “All five judges evaluated the nominee’s profiles based on the five criteria below and your company has met the criteria: Clear explanation of overall business; Performance; Creativity/Innovation; Contribution to the Thai economy; and Level of staff participation/involvement.”

Judges made no specific comment on comparative attributes among the contenders for the award.

Class Act Media was founded in 2009 and is the sole survivor of the intense competition between Phuket’s foreign language newspapers. The company’s portfolio encompasses The Phuket News (in English, Thai and Russian), Phuket News TV and Live 89.5 Radio.

In May this year, the island’s two leading publishers of print and online media, Class Act Media and Image Asia, joined forces.

Established in 1999 and well known as the creator of leading yacht racing event, Phuket Raceweek, and Thailand’s first international boat show, PIMEX, Image Asia’s core business has always been its print and online publishing, including Where to Eat in Phuket, Window on Phuket and The Map of Phuket (English, Chinese and Russian).

Image Asia relocated its base to Class Act Media’s offices near the Samkong (Tesco-Lotus) intersection, but its print and online media continue to appear under its own identity, created by the same editorial team and overseen by Image Asia’s founder, Grenville Fordham.

“Both our companies have come through some very stimulating times for the media industry, and there are still plenty of exhilarating challenges ahead,” said Mr Beavan at the time.

“By joining forces, not only can we now offer something that will work for every Phuket advertiser, but we benefit from economies of scale that will allow us to ramp up our investment in the digital future,” he added.

In total, 44 businesses were in contention for the Tiba awards.

The other awards and their winners were as follows:

Winner – British Community in Thailand Foundation for the Needy (BCTFN)

“We also thank all those who nominated those who entered in each category and also our hard-working judges who had the difficult job of making the final selections,” the BCCT noted in a statement announcing the awards

“We look forward to the 2020 Thailand International Business Awards currently scheduled to be held on Thursday September 24, 2020,” it added.