PHUKET: Trained, qualified lifeguards will be on patrol at Surin Beach by next week, MaAnn Samran, Chief of the Cherng Talay Tambon Administration Organisation (OrBorTor), has told The Phuket News.

tourismmarineSafetydeath
By The Phuket News 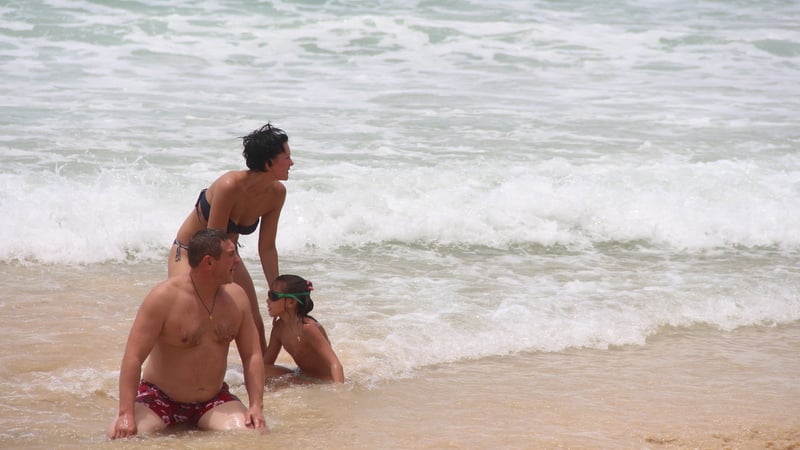 A family regain their breath at the water’s edge while strong waves pound the shore. Photos: Tanyaluk Sakoot / file

“Lifeguards will be on patrol at Surin Beach next week. The tentative start is July 15 (Monday),” Mr MaAnn explained in a phone interview yesterday (July 9).

“There will be five lifeguards and a lifeguard team leader with five automated external defibrillator (AEDs), a jet-ski and other surf life-saving equipment at their disposal,” he said.

“I have been told these lifeguards have two years’ experience working as lifeguards in Phuket and they have lifeguard training certifications. I don’t know which company they used to work for, but they are qualified to be lifeguards,” MaAnn assured.

The rush to hire the lifeguards follows a 52-year-old British national from Hong Kong drowning at Surin Beach last Wednesday (July 3) after being caught in a rip that dragged him away from shore.

The man’s 25-year-old son was rescued and rushed to hospital. (See story here.)

The move to have the trained and equipped lifeguards available at such short notice is costing the OrBorTor about B170,000 for the first month, Mr MaAnn explained.

“I pressed this issue hard and it was agreed to approve the budget for this, but it will be short-term arrangement only, month by month, and the lifeguards will be on patrol at Surin Beach only,” he said.

“If I didn’t have lifeguards [at Surin Beach] as soon as possible, I would become the focus of blame and someone would hit me,” Mr MaAnn said yesterday.

The OrBorTor is forced to make temporary arrangements only as it must wait for the selection of the company to be hired under a government concession to provide full-time lifeguards at Surin and Bang Tao beaches to be resolved, Mr MaAnn explained.

“I am waiting for the Thai Government Procurement division in Bangkok to reply back to Cherng Talay OrBorTor about LP Laikhum Co Ltd appealing them losing their bid for the contract,” Mr MaAnn said.

Thai Government Procurement division (click here) of the Comptroller General's Department (click here) operates under the Ministry of Finance, and by law administers and adjudicates on all government concession contracts.

However, the initial contract was allowed to lapse with LP Laikhum no longer providing lifeguards following a series of deadly incidents where its “lifeguards” – whose experience and qualifications were never confirmed – refused to enter dangerous surf to rescue drowning tourists. (See story here.)

After the collapse of the lifeguard system at Surin Beach, without naming any particular companies involved, Region 8 Police submitted the results of their preliminary investigation into alleged corruption over a government contract issued to provide lifeguards at Phuket’s beaches to the National Anti-Corruption Commission (NACC) in Bangkok.

Region 8 Police Deputy Commander of Investigation Col Arnon Dashrugsa confirmed that a police investigation had confirmed irregularities in the execution of the contract. (See story here.)

Regardless, LP Laikhum submitted a bid for a second government tender offered for companies to provide lifeguards in Cherng Talay.