PHUKET: The search for Filipino tourists who disappeared in strong surf at Freedom Beach on Wednesday continues today (July 19), with police, lifeguards and rescue workers expanding their search area. 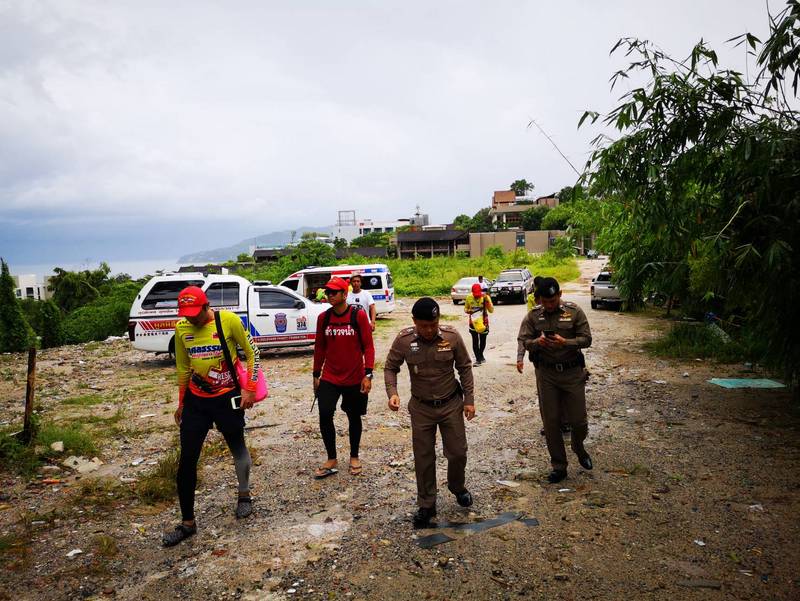 UPDATE: Karon Police informed The Phuket News this afternoon that the body of one of the missing Filipino tourists has been found near Freedom Beach. The man was identified by a tattoo was all police would say that the time.

Lifeguards at Patong are continuing their search to the north of where the two men – Angelo Bien Rafael Cortez, 29, and Noah Ibay, 40 – disappeared, while police and rescue workers are now searching areas to the south, The Phuket News was told today (July 19).

“We have not found them yet. The wind and wave have hampered our search efforts since they went missing on Wednesday,” Karon Chief Police Col Prawit Sutthirueangarun told The Phuket News.

“We had to delay our search this morning because of the weather. We must wait for the wind to ease so it is safe for our search team also,” he said.

“We will expend the search area to Tai Kua beach, which is located south of Freedom Beach (click here), and we will search along the rocks and the shore to find them,” he added.

However, hopes that the missing men are still alive are quickly fading.

“I believe that both men are not alive because there have been strong waves during recent the current weather, and they they might have pushed against the rocks in the area,” Col Prawit said.

“A full day has now passed, and with this strong weather they should have been pushed back to somewhere along the shore by now,” he said.

“I believe that our search teams will find them today. If not, we will ask the Royal Thai Navy to support us with a helicopter to help the search,” Col Prawit said.

The Royal Thai Navy Search and Rescue (SAR) personnel are already involved in the search efforts, though Col Prawit declined to answer why a helicopter had not been requested earlier.

“We will continue with our search,” he said.

Explaining how the two men came to be missing, Col Prawit said, “Mr Cortez and Mr Ibay were among a group of 13 tourists who came to Phuket together. Eleven of them, including Mr Cortez and Mr Ibay, went down to Freedom Beach late Wednesday afternoon with some alcohol.

“Six of the 11 went into the sea, but only four came back. Mr Cortez and Mr Ibay had disappeared among the waves,” he said. (See previous story here.)