patongpolicecrimealcoholviolence
By The Phuket News 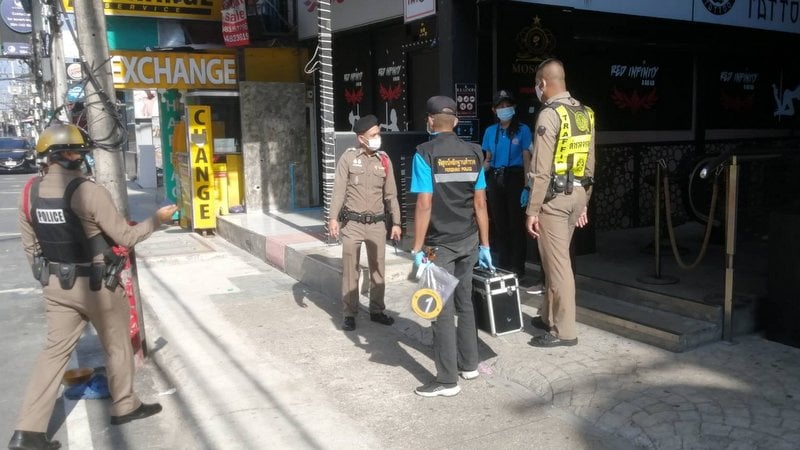 Phuket Provincial Police Commander Maj Gen Pornsak Nuannu late yesterday explained that he has ordered investigating officers to prosecute the shooter, Cpl Pornthep Channarong, with every criminal charge that can be applied.

“I have already ordered Patong Police to process him three charges: attempted murder, carring a firearm in a public area without necessary reason, and firing a weapon in a public area,” Maj Gen Pornsak said.

“I have also already reminded the chief of every police station across the island to take care of their subordinates’ discipline and raised the issue about carrying firearms.

“Carrying firearms is to prevent any type of crime that may happen, not to commit a crime by themselves like this incident. If I see any police doing such a thing, I will decisively proceed in terms of both officer discipline and criminal charges,” he said.

“Cpl Pornthep is now in custody of Patong Police for questioning. At this stage, he told us that on that night he drank to celebrate his transfer. He and Mr Aroon had never known each other.

“For Mr Aroon, he is still in a worrying condition and under close care at Vachira Phuket Hospital,” Maj Gen Pornsak added.

The officers also presented a vase of flowers to Mr Aroon’s wife. The police commanders offered her words of comfort and promised that police action in the case would proceed seriously and in a straight-forward manner.

Phuket Provincial Police yesterday revealed through a statement that Lt Gen Kitrat had already ordered a disciplinary investigation into the incident and ordered for Cpl Pornthep to be dismissed from the Royal Thai Police.

“I came to visit Mr Aroon and cheer up his relatives. I want his relatives and people to not be worried about this case, as we will proceed this case decisively,” Lt Gen Kitrat said today.

“I do not compromise in dealing with our officers in incidents like this, and I can confirm that he already has been dismissed from the Royal Thai Police,” he said.

“The incident was caused by an officer who did something wrong that our organisation does not want. We are a big organisation with more than 200,000 officers under our control. Our officers are not all bad like this,” he said.

At the hospital late yesterday, Mr Aroon’s wife, told reporters, “I have seen the CCTV footage of the incident, and I cannot accept that. I have never seen anything like this, and it should not be a police officer committing crime like this.

“My husband has been working so hard for the past six years for me and our children. We have a 4-year-old daughter and 3-month-old son,” she said.

“Normally, he works as a motorbike taxi driver, but a few days ago he went to help his mum to sell noodles. He was shot while he was walking back from collecting a noodle bowl,” she explained.

Mr Aroon’s wife also left her husband’s hospital room to pray to the Buddha image at the hospital. She wished for more people to donate blood to help her husband’s recovery.

“For his condition, the doctor told me that the bullet went through his lung. He lost a lot of blood. We need a lot of Type B blood for him,” she said.