PHUKET: Phuket Governor Narong Woonciew led an inspection and beach cleanup at Koh Maphrao yesterday (Mar 3) as part of a campaign to highlight and support community development on the small island, located off Phuket’s east coast.

tourismtransporteconomicsenvironment
By The Phuket News A public hearing was held for local residents to explain their problems, and needs. Photo: PR Phuket 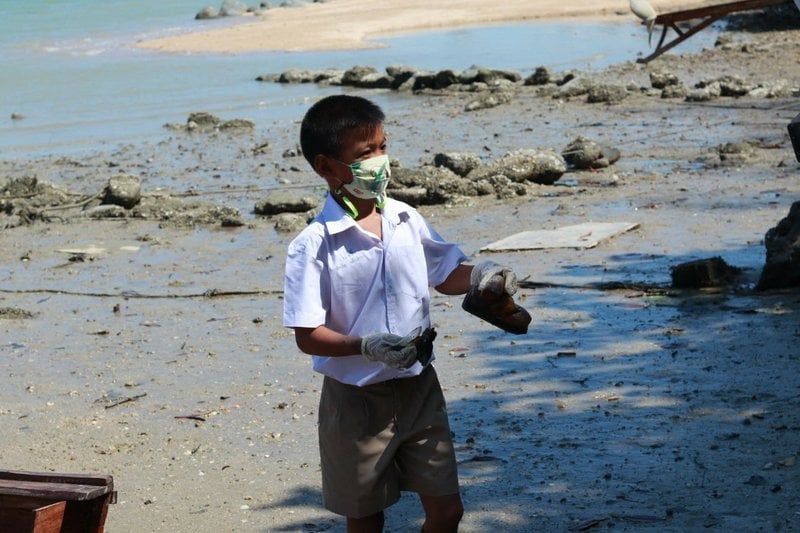 Joining Governor Narong was Wiwat Sanlayakamthorn, President of the Agri-Nature Foundation, along with Vice Governor Piyapong Choowong, local officials and staff from the foundation.

The cleanup was held under the banner “Reporters do only good things ‘Hidden island@Koh Ma Prao” as part of the “national mass communication day” activities.

In the afternoon, Governor Narong led reporters and officials on a field trip, and led a public hearing for local people to share their problems and suggestions to develop the island in terms of ‘agrinature’.

Governor Narong explained to reporters that Koh Maphrao covers about 2,000 rai, and is home to about 700 people living there.

“About 99% of the island’s residents are Muslim and work as fishermen and farmers. The island has one school, Koh Maphrao School, which is open [to students] from kindergarten to Prathom 6 [final year of elementary school], as well as a Health Promotion Hospital and two hotels on the island,” he said.

The goal of the development plan is to create a model to be used elsewhere, Governor Narong noted.

“The development plan must focus on the [economic] potential and lifestyle of local residents as its priority,” Governor Narong said.

“The main feature of the island is its distance from Phuket, only 10 minutes by boat. The island has beautiful beaches, rich nature, good soil for agriculture and has a calm and private atmosphere, which is perfect for relaxation,” he said.

“However the weakness of the island is the local transport. Visitors have to pay for transport many times before reaching their destination, such as the cost of parking at the pier or taking a local taxi [to the pier] , then paying the boat fare and then paying for tuk-tuks on the island,” he explained.

If such issues could be resolved, “this could be a charm and a selling point of the island,” Governor Narong said.

“The ‘Koh Maphrao Model’ must develop all aspects of society at the same time, with a plan to enhance the quality of life of the people on the island to have a better life, but the development must be people-centered. People must be ready to cooperate. They must create their own products. People must have skills in welcoming tourists,” he added.