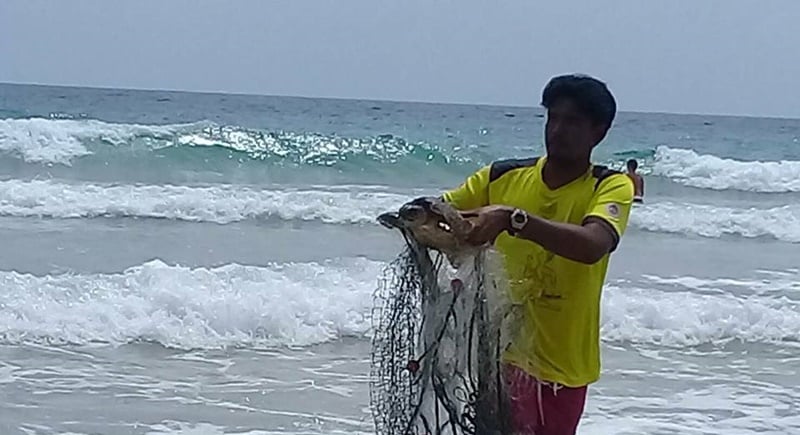 A ligfeguard brings the turtle caught in the fishing net to shore. Photo: Phuket Lifeguard Service The lifeguard returns the turtle back into the sea after freeing it from the fishing net. Photo: Phuket Lifeguard Service The lifeguard removes the net from around the turtle. Photo: Phuket Lifeguard Service

But sadly they have also found other turtles this week that have not been so lucky.

Vitanya Chuayuan, Deputy Chief of the Phuket Lifeguard Service, told The Phuket News today (July 25), “We found the turtle caught in the fishing net at Nai Thon Beach at 3pm yesterday afternoon. We cut the net and removed it from around the turtle. Luckily the turtle suffered no injuries and it swam back out to sea.

“But that sea turtle was lucky, lifeguards stationed at Kamala Beach yesterday found a dead Green turtle washed up on the beach which was between 60-70 centimetres long.

“In addition, on the morning of July 22, we found an injured Hawksbill turtle about 50cm in length on Nai Harn Beach in Rawai.

“We called officials from the Phuket Marine Biological Centre (PMBC) to take care of this turtle because it had a wound on its neck.

“We believe that it washed up on the shore after it freed itself from a fishing net.

“This month we have found more sea turtles at Nai Thon and Kamala beaches. If they are caught in fishing nets we free them and put them back in the sea, However, if they are injured or dead we inform the Phuket Marine Biological Centre,” Ms Vitanya added.

PMBC officials confirmed that they received a report that Phuket lifeguards found a dead turtle on Kamala Beach yesterday and that they took the turtle back to the centre to find the cause of death.

They also confirmed that they have the rescued Hawksbill turtle in their care.