PHUKET: Ten men, five of them soldiers from Nakhon Sri Thammarat, have been arrested for taking a Ukrainian couple hostage overnight and then demanding half a million US dollars (B15 million) from them. 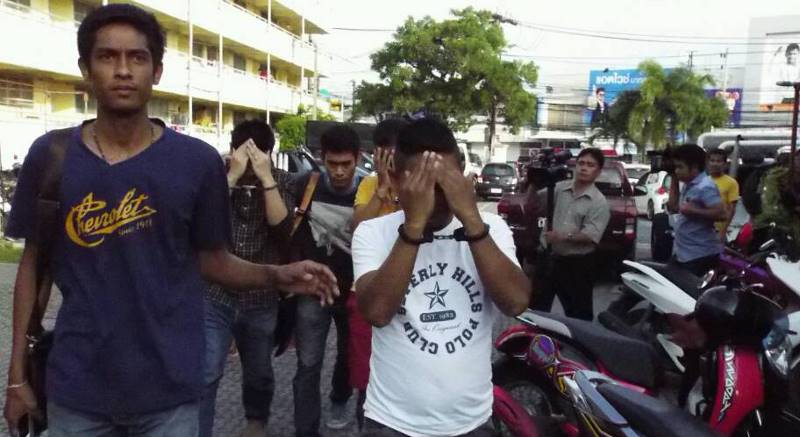 Some of the soldiers are brought into Chalong Police Station. Igor Iermanov and his wife Maryana are escorted into the police station. Two more of the abductors, under arrest.

But what should have been a smooth operation to get the money ended in the ten being arrested.

The Thais had freed Maryna Iermakova, 32, before taking her husband, Igor Iermakov, 37, to the Kasikorn Bank in Rawai, confident that she would not risk telling the authorities.

But she went immediately to Chalong Police Station to ask for help.

Lt Col Chukiat Imjaitam, deputy superintendent of Chalong Police, told The Phuket News that the couple owed money to a man in the Ukraine with whom they had been involved in a business.

Mrs Iermakova told The Phuket News this evening that she and her husband had borrowed half a million dollars to promote their multi-level marketing business.

Col Chukiat said the businessman in the Ukraine hired the five soldiers to collect on the debt. It is not clear yet how the other five Thais became involved.

The colonel confirmed that the couple were not suspected of committing any crimes. They run a kite surfing school in Phuket.

After releasing the woman, the 10 took Mr Iermakov to a Kasikorn bank branch in Rawai, but discovered that there was only B1 million in the account.

They then took him to the Kbank branch near Chalong Circle – and near Chalong Police Station – where the abductors told their hostage he could give them a cheque for the money but ordered him to call his wife to meet them at the bank.

Travelling in three cars, the ten with Mr Iermakov arrived at the bank. Told of the rendezvous by Mrs Iermakova, the police were waiting for them and arrested them before they could go inside.

The five soldiers, when caught, were in possession of a variety of weapons, including 11mm pistols and Heckler & Koch 33 assault weapons. Happily there was no gunplay.

The ten people arrested were named as follows:

They have been charged with kidnapping and demanding money with threats.

Initial reports that some of the abductors were Tourist Police volunteers were strenuously denied by Capt Uramphon Kundetsumrit of the Tourist Police. He said that none of the names revealed worked for his department.

It is not clear how the Ukrainian businessman was able to hire the soldiers.