BANGKOK: The national telecom regulator says it may have to abandon a plan to force foreign visitors to use special SIM cards that can be tracked by authorities if strong opposition is registered at the first public hearing on the issue. 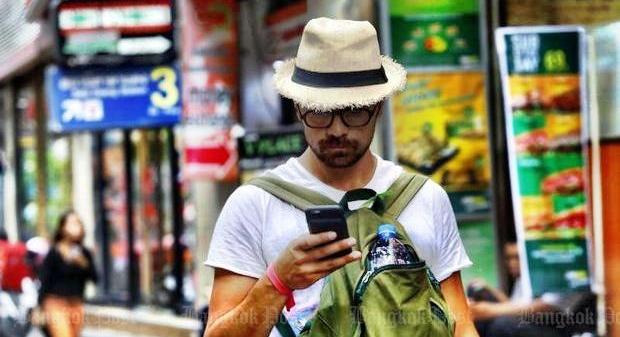 A tourist checks his phone on Silom Road, probably unaware that the National Broadcasting and Telecommunications Commission (NBTC) wants to issue him a special SIM card so he can be closely tracked and monitored. Photo: Bangkok Post / Tanaphon Ongarttragoon

The first public hearing on the tourist SIM plan is scheduled for next month.

The National Broadcasting and Telecommunications Commission (NBTC) has approved in principle a requirement that foreign visitors to Thailand use special SIM cards in their phones that can be tracked by the authorities.

The resolution was said to have been drawn up in the interests of national security.

“If the plan is widely opposed and draws heavy criticism from participants at the first hearing or leads to a potential threat to travellers' privacy, we might scrap it completely,” NBTC secretary-general Takorn Tantasith told the Bangkok Post.

Embassy representatives as well as ambassadors from China, the US, Britain and some European countries – all of which provide high tourist traffic to Thailand – will be invited to participate at the hearing, he said.

The regulator will also raise the tourist SIM plan on its website and other popular social networking sites, including www.pantip.com, to generate more feedback.

The tourist SIM initiative was originated at a regional-level meeting in Phuket in July, which gathered telecom regulators from the 10 Asean countries.

Among the 10, Malaysia is the only one using special traceable SIM cards for foreign travellers.

Earlier, the NBTC announced plans to embed location-based service software into SIM cards to make it easier to track a user in the event he or she became a criminal suspect.

But a telecom industry source said the plan is also being reconsidered due to the impact it could have on tourism, which is viewed as an important engine of the country’s economic growth.

From January to July of this year, 19.1 million foreign tourists visited Thailand, an increase of 12 per cent year-on-year, according to the Tourism and Sports Ministry.

Earlier, intense criticism of the plan was posted by foreigners on social media. Many said they would opt to use international mobile roaming services rather than buy a special SIM card in order to protect their privacy.