PHUKET: A horrific accident on Thepkrasattri Rd southbound left a 3-year-old Phuket girl without an aunt after she was crushed by a tour bus packed with Chinese tourists yesterday afternoon (April 21). 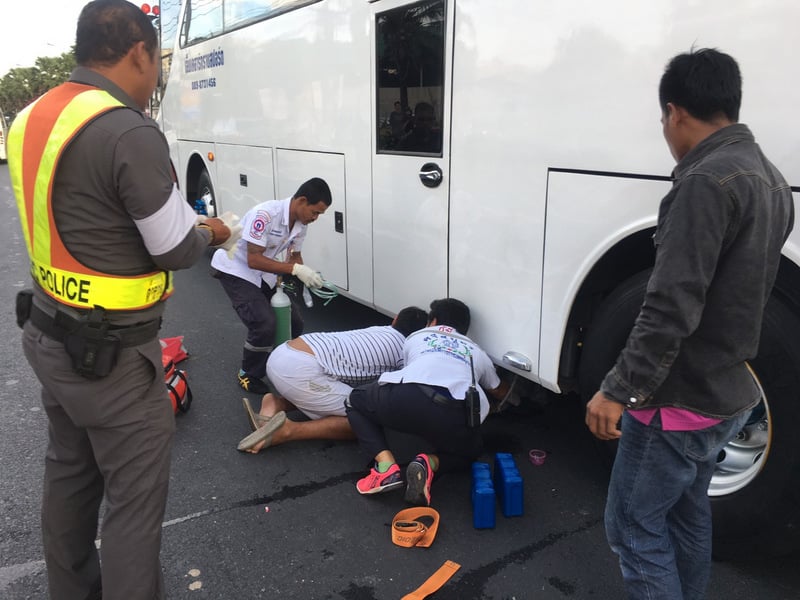 Police said the bus was travelling at high speed at the time of the impact. Photo: Eakkapop Thongtub

Lt Col Sunan Petchnoo of the Thalang Police was notified the accident, about 300m to the north of the locally called “Khao Lan Intersection” in Baan Lipon (see map below), at 5:45pm.

Srisoonthorn rescue workers arrived at the scene with Thalang Police to find traffic had been forced to a standstill due to the crash.

Under the right side of the vehicle lay a Honda Wave motorbike on which Sooksai Phudeethip, 38, and her 3-year-old niece Sasiprapra had been riding on.

Ms Sooksai, however, was run over and dragged some 30 meters under one of the rear tyres.

The bus driver was not at the scene when police arrived.

According to police, the bus was travelling at high speed at the time of the impact.

Ms Sooksai was travelling in the same direction as the bus, but police said they were told that Ms Sooksai suddenly changed lanes, causing the bus to collide with it at high speed.

Col Sunan made a public statement urging the driver to present himself to police.