PHUKET: Phuket Vice-Governor Jamroen Tippayapongthada became frustrated in a meeting yesterday afternoon (September 12) to address the issue of jobless beach operators insisting on going back to their old jobs at their original locations. 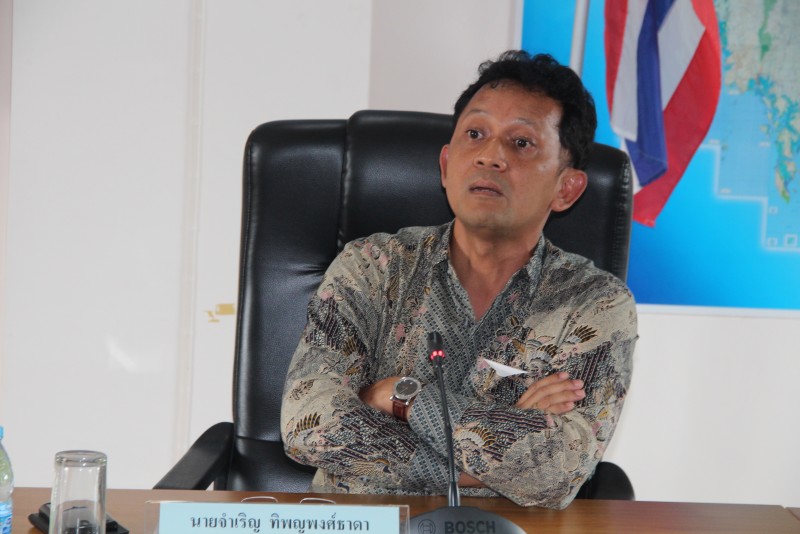 Also joining the meeting at Phuket's Office of Disaster Preventaion and Mitigation, was Patong Mayor Chalermluck Kebsup, as well as representatives from each of the island's municipalities and district offices affected by the recent top-down beach crack-down and clean-up.

The objective was to discuss a solution for some 1,441 beach operators who remain jobless three months after being kicked off the beaches (story here).

“After we reviewed the people who registered for help from us, we found that there are two kinds of people in registration: really poor people and 'wannabe' poor people,” said a representative from Thalang District Office.

Patong mayor, Chalermluck Kebsup added, “As I've heard from the three district offices, most ex-beach operators are all in the same stance, that they do not want to change or move their location, so how can we find the solution?”

Hearing this, Phuket Vice Governor Chamroen Tippayapongthada became upset “Anyone in the meeting, please tell me, which law supports locals to have the right to occupy public land ?”

“If I could, I would manage all public land for all the people to share and use it. But in fact, this isn't the case. They [the disgruntled, jobless beach vendors] must accept this point!” he stated firmly.

“They should find another job instead, otherwise they will not have no money as they always say. I will keep an eye on them, are they going to die if they cannot have their previous job.”

The District Office chiefs were assigned to monitor the beaches in their areas. As for coming negotiations, “On September 22, we will start at Thalang district first, since Laguna agreed to hire all of beach massage to be their staff and they also provided the place for taxi ranks,” V/Gov Chamroen said.

“After that we will use this model [solution] to apply for Muang Phuket and Kathu districts.” he noted.