PHUKET: The driver of a motorbike was injured by a falling pylon this morning (Feb 25) when the driver of a 10-wheel truck attempted to drive the truck under low hanging cables and brought down five pylons in the process. 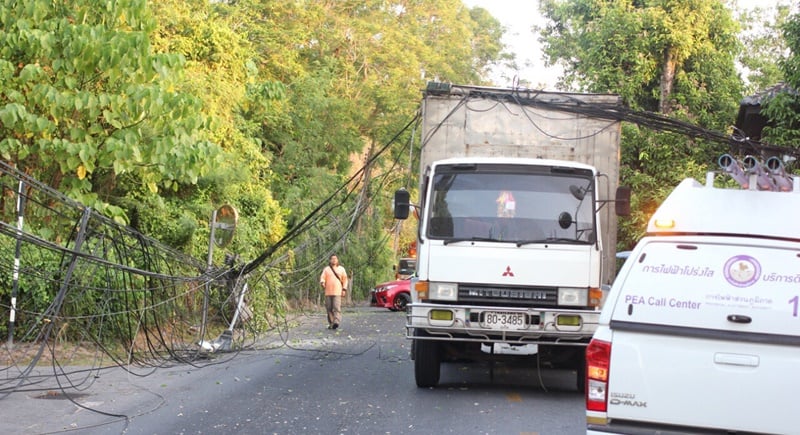 Police arrived at the scene to find the 10-wheeler parked in the road with a large number of tangled cables caught on its roof. Photo: Darawan Naknakhon The motorbike driver was thrown from the bike and landed next to a wall. Photo: Darawan Naknakhon

Lt Ronaphomi Permpoon from Phuket City Police was call to investigate the incident on Palien Rd in Talad Yai at 6:45am. It was reported that the driver of a motorbike had sustained injuries as a result of one of the pylons falling on him.

Police arrived at the scene together with Kusoldharm rescue workers to find the 10-wheeler belonging to Chokpanuchit Co parked in the road with a large number of tangled cables caught on its roof.

“Along the road five pylons had been damaged, and under one pylon was a wrecked Honda Dream. The motorbike driver was thrown from the bike and landed next to a wall. Rescue workers had already took him to hospital by the time we arrived, ” said Lt Ronaphomi.

The truck driver, 48-year-old Nopparat Ayuttaya, told police that was coming back from Bangkok heading to his company in Rassada.

“Whilst I was driving some cables suddenly fell down. I did not see them and drove into them which caused the pylons to fall,” he said.

Lt Ronaphomi added, “Electricity Authority officials were notified about the incident and will fix everything and install new pylons.”

Police have said Nopparat is likely to be charged with reckless driving causing injury and damage to property after they have gathered all information and questioned the driver of the motorbike. His truck has also been seized.