PHUKET: A small barrier of sandbags placed on the road in front of Patong Hospital spared the immediate vicinity from flooding, report local officials, while heavy rain continues across the island. 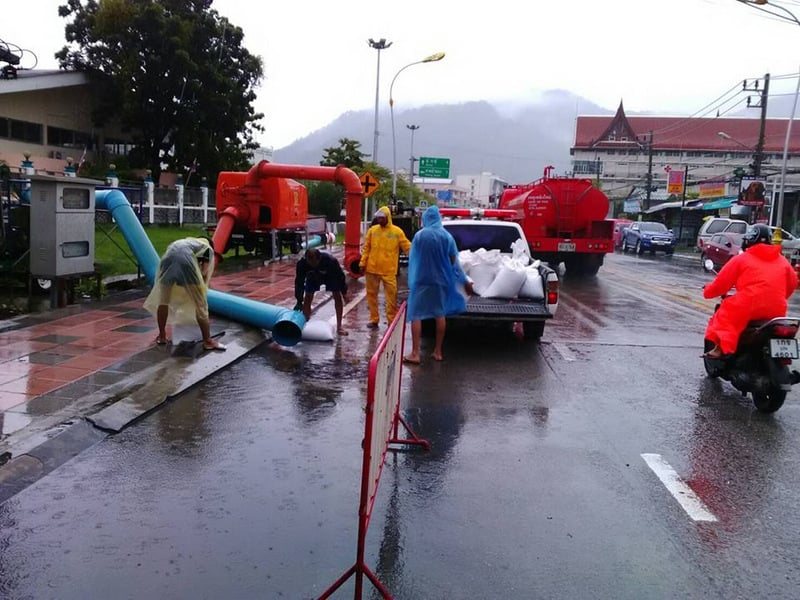 Patong Deputy Mayor Boonma Aeapsap, responsible for flood-prevention in the town, ordered officials to fill sandbags with sand from Kalim Beach and have them strategically placed to encourage better water flow from the road surface into the drains in front of the hospital.
“There was heavy rain in our area yesterday,” Mr Boonma said. “We used sandbags in front of the hospital to get water off the road as quickly as possible.

“The drain in front of Patong Hospital feeds into Klong Pakbang, it is an important point, If this road floods, it affects Patong Police Station as well as Sainamyen Rd and Nanai Rd.

“The water level has fallen this morning (Aug 28), but we are still cautious about flooding. It’s better than yesterday, but the weather is still worrying,” Mr Boonma added.

Meanwhile, other areas across Phuket remain affected by the heavy downpours.

The deluges continued this morning, with 89mm of rainfall soaking the Phuket Town area before 10am today causing more minor flooding in certain areas across town, notably along Soi Surin 2.