Phuket tour agent caught with Kuwaiti iPhone in his underpants

Phuket tour agent caught with Kuwaiti iPhone in his underpants

PHUKET: Police arrested a tour agent in Patong after he was found with a Kuwaiti tourist’s iPhone 6 stuffed in his underwear yesterday afternoon (Nov 24). 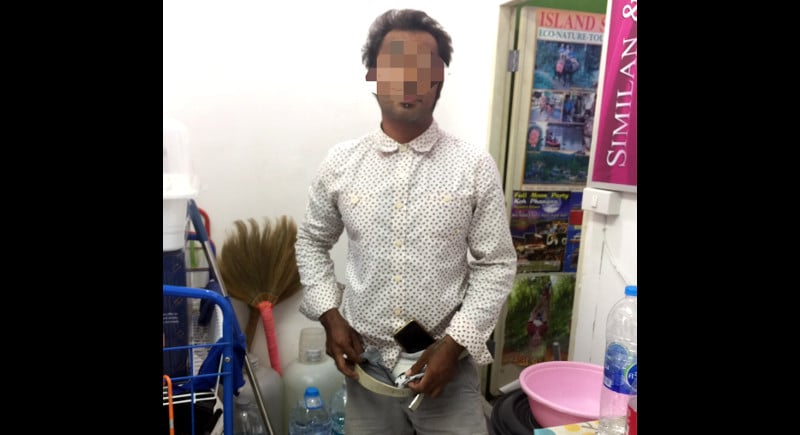 Patong travel agent Kotamon Chayathanyakorn was caught with the iPhone 6 down the front of his underpants. Photo: Patong Police

Patong Police led by Lt Col Somsak Thongkleng arrived at the “All In One Travel” tour agent counter on Phra Metta Rd at 3pm to investigate a report of the phone “disappearing” at the shop.

“We received a report at 2:30pm from a Kuwaiti tourist, Mr Abdul Nabimh Redha, that someone had stolen his mobile phone that he had left at the shop,” Col Somsak said.

“Mr Redha said that he went back to the store 10 minutes later, after realising that he had forgotten his iPhone there, but he did not find it.”

“Mr Kotamon told us that he did not see any mobile phone, but he was acting suspiciously so we searched him,” Col Somsak revealed.

“We discovered Mr Redha’s missing iPhone in Kotamon’s underwear, so we escorted him to station,” he added.

Mr Kotamon admitted to police that he took Mr Redha’s mobile phone and has been charged with theft, Col Somsak confirmed.