PHUKET: A Phuket van driver is calling for police to make some progress in catching the two men who opened fire on him and two friends last year, with one of the bullets scraping his scalp, after the two suspects have been seen walking around in public. Mr Itsada points to where he was shot at in the attack last year. Photo: Eakkapop Thongtub 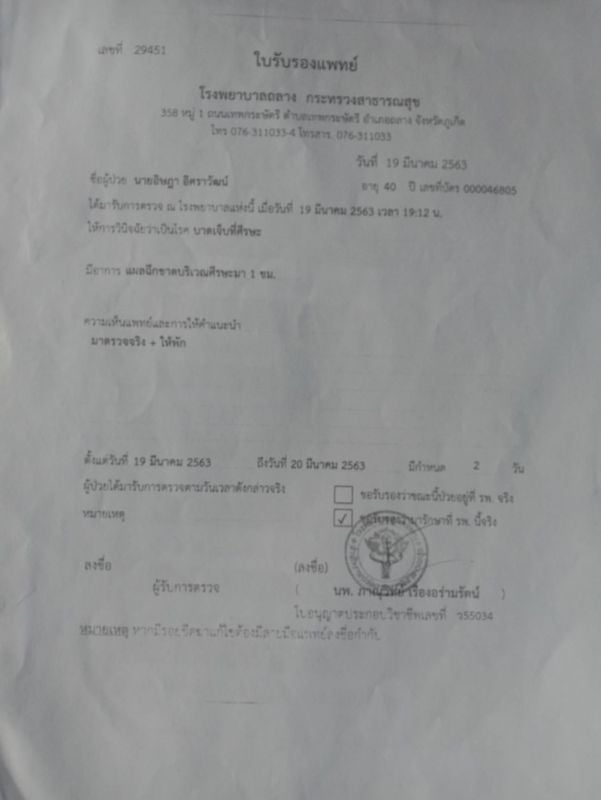 Cherng Talay resident Itsada Itsarawat, 40, called reporters to hear his plea for justice yesterday (Jan 20), and presented case documents and photos of the two men now wanted on an arrest warrant for attempted murder and the competing van driver who allegedly hired them.

The attempt on his life followed an incident on Mar 16 last year when his boss ordered Mr Itsada to transfer a group of customers to a place, but he could not make it, so his boss punished him by not giving him any customers for five days, Mr Itsada explained.

A day after that, Mar 18, Mr Wiroj was unable to deliver customers to their destination, but he was not punished, so Mr Itsada posted his own comments on the same company chat group, he explained.

Angry, Mr Wiroj called Mr Itsada to meet beside the road through a rubber plantation so they could resolve their differences, Mr Itsada said.

On Mar 19, Mr Itsara arrived at the rendezvous, but brought his brother and his brother’s friend, he said.

However, Mr Wiroj did not show. Instead, two men arrived on a motorbike.

The men called Mr Wiroj and told him that Mr Itsada was not alone, Mr Itsada said.

Mr Wiroj then called Mr Itsada to tell him to have his two fellows leave so they could talk alone, he continued.

At 6:20pm, the same two men returned on their motorbike and one of them started shooting at Mr Itsada and his companions while they were standing by the side of the road.

The trio scrambled for cover, hiding behind rubber trees, he said.

The assailants shot five times, with what was later confirmed to be a .38-calibre firearm, before riding off, Mr Itsada said.

One of the bullets scraped the top of Mr Itsada’s head, he added.

Mr Itsada was taken by his brother from the scene of the shooting to Cherng Talay Police Station, where he reported the incident to Capt Yannaphat Malai while still bleeding from the head wound.

Police called an ambulance to take him to Thalang Hospital, where the wound was closed with five stitches, Mr Itsada said.

“I keep asking Cherng Talay Police for updates of my case, but they keep telling me that they are still searching for evidence and still looking for Wiroj and the two men,” Mr Itsada told reporters.

“The latest update was on June 12, when I was informed that the court had already issued arrest warrants for the two men, named as Charif Soison and Nanthaphat Manaboot, for committing attempted murder together,” Mr Itsada explained, while presenting to reporters the official report from Cherng Talay Police confirming the update.

However, police have not confirmed any action against Mr Wiroj for allegedly ordering the hit.

“I wonder why Cherng Talay Police have not found the men while some local people have confirmed they see them every now and then. Local residents have seen one of them still walking around in the area, so why can’t police see them?” Mr Itsada asked.

“My family and I do not feel safe. We are worried the men will come back and finish the job,” he said.

“I want reporters to check with Cherng Talay Police their progress in the case and ask Phuket Provincial Police Commander Pol Maj Gen Pornsak Nuannu to investigate his own subordinates,” Mr Itsada said.

Lt Col Rassada Klungwong of the Cherng Talay Police briefly explained to The Phuket News today (Jan 21), “Mr Wiroj has already presented himself to police for questioning. He had evidence to confirm where he was and who he was with at that time [of the shooting].

“We do not have any evidence to prove he was the mastermind [sic, of the crime],” Lt Col Rassada said.

“As for the two men, we are still searching for them. We believe that they have already fled the island,” he said.