PHUKET: A 400-metre section of the Patong beachfront road will be closed from Bangla Rd to Sawatdirak Rd each day from 6am to 4pm for a month, starting this Sunday (Aug 25). 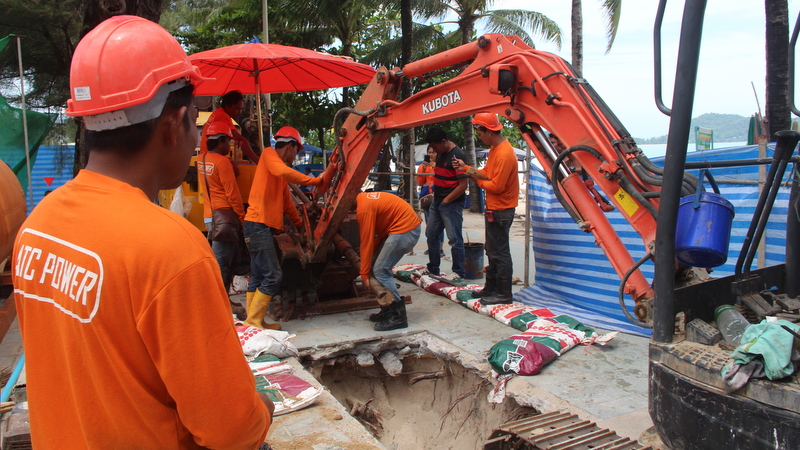 The section of the busy road, offically called Thaweewong Rd, will be closed each day until Sept 30 so that workers can continue to install power and communications cables underground along the beachfront, Patong Mayor Chalermluck Kebsup has announced.

“All vehicles will be prohibited from driving through this area. All vehicles on Thaweewong Rd must turn onto Bangla Rd instead,” Mayor Chalermluck said in an announcement issued yesterday (Aug 19).

“The road will re-open each night after 4pm,” she added.

However, project engineer Aut Khrueasane later confirmed to The Phuket News that some vehicles will be allowed to drive along the road while the works are ongoing.

"One lane will be left open for special vehicles to pass. These will be vehicles being used by workers or business owners wanting to get to their businesses," he said.

“However, the vehicles must have on them a special white sticker issued only by Patong Municipality in order to be allowed to enter and drive through the work site,” he said.

Taxis and tuk-tuks will be allowed to drive into the area, Mr Aut added.

"But only if staff at businesses along that section of road confirm that the taxi or tuk-tuk is picking up or dropping off customers at their business," he said.

The works will see a trench for power and communications excavated under the road, leaving the footpaths available for pedestrians to walk along while the work is being carried out.

“I apologize to the people again for this inconvenience, but please be patient. When the project is completed the road will be beautiful to look and neat. It will be ready to welcome tourists,” Mayor Chalermluck said.

Excavation of the trench where the power and communication cables along the Patong beachfront are to be installed began further north on July 26.

Excavation for Phase 1, from Sawatdirak Rd to Loma Circle at the northern end of the beach is complete, Mayor Chalermluck explained.

Work is now beginning on Phase 2, the 400-metre section from Bangla Rd to Sawatdirak Rd, she added.

Aut Khrueasane, the project engineer, explained that a meeting was held with local residents, building owners, shop owners and tenants on Aug 17 to explain to them that the road closure was coming.

“These business don’t have to close during the day. They can open their business normally,” he said.

However, Mr Aut admitted, “We understand that business operators will be affected while the work continues as it will not be convenient for them to access their properties.

“Also they have been asked to keep the footpaths clear for workers and so that people can walk unobstructed along the footpath while the construction is ongoing,” he said.

Mayor Chalermluck explained that the project to install the cables underground will be carried out during the low season only.

Mr Aut also explained that the original plan to excavate the cable trench at the northern and southern ends of Patong first, and leaving the middle section to last, was changed at the last minute by Mayor Chalermluck after consulting with local residents and business owners.

“It was changed to try to minimise the disruptions to traffic and businesses as much as possible,” he said.

The work is being carried out under a B228 million contract signed to joint-venture I.M.P Consortium, which has until Mar 5, 2020 to complete the work.

Under the contract, power lines and communications cables, including a fibre-optic mains, are to be installed underground along three kilometres of the Patong beach road from the Pak Bang Canal at the southern end of the beach to Haad Patong Rd near Loma Park. (See stories here, here and here.)

Mr Aut assured that having power cables installed underground will be safe, despite the Patong beachfront exposing the cables to regular heavy rain, sand and salt corrosion.

“It is safe. The equipment being used and all the construction processes have been approved by the Council of Engineers Thailand.”

“Also, no trees will be cut down along the Patong beachfront to make way for this project,” Mr Aut said.