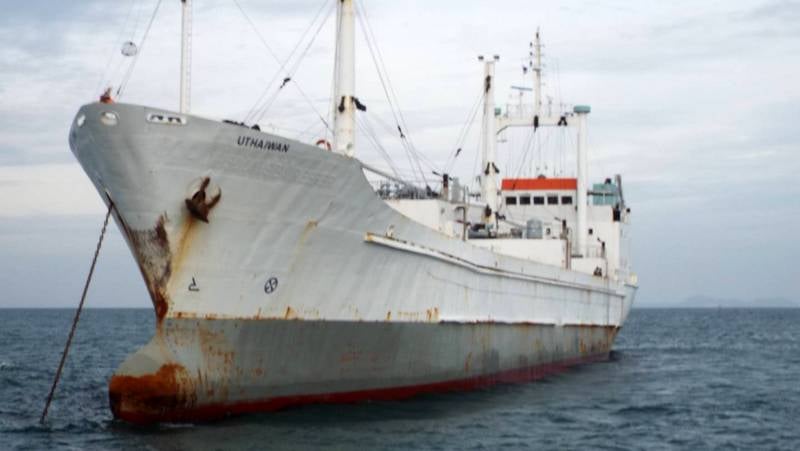 V/Adm Ronnapop, who also serves as the Director of Thai Maritime Enforcement Command Center (Thai-MECC), announced the seizure at press conference held at the Third Area Command at Cape Panwa.

Also present for the announcement were Sakorn Poodam of the Phuket Marine Office and Wichit Police Chief Col Nikorn Somsuk.

V/Adm Ronnapop explained that a boat was reported as entering Thai waters last Thursday (Sept 12), but the Phuket Marine Office had not been informed of the boat’s arrival and its Automatic Identification System (AIS), as required by Thai law, was turned off, leaving Fisheries Monitoring Center (FMC) officers unable to identify it.

On Friday (Sept 13), the boat turned on its AIS, allowing officers at the Phuket Port in-Port out Control Center (PIPO) to identify it as the “Uthaiwan”.

“At 9:45pm, FMC officer informed Thai-MECC to follow the suspected boat which was previously named ‘Wisdom Sea Reefer’, but on the AIS the boat was under the name ‘Uthaiwan’,” V/Adm Ronnapop explained.

“On Sept 14 (Saturday), at 1:30am, Thai-MECC and relevant official together seized the suspected boat, which was a 3,000 gross tonnage fishing boat from Cameroon, as shown in the AIS, the boat was seven miles off Phuket shore,” he said.

According to MarineTraffic.com, the Wisdom Sea Reefer measures 102 metres long and 14m across. It was registered in 1977 and was last officially registered in Cameroon.

Navy and relevant officers together examined the boat – all eight people on the boat were arrested, all eight were Thai, V/Adm Ronnapop said.

He added that the international illegal fishing monitoring organisation OceanMind had informed the Marine Department that the suspected boat was declared as an IUU vessel by the Indian Ocean Tuna Commission (IOTC).

The boat set sail from Cambodia on Sept 2 and passed through the Strait of Malacca, the organisation reported.

The eight Thais on board were all charged under Section 94 of the Royal Ordinance on Fisheries B.E.2558 (2015), which stipulates that no person shall bring a non-Thai fishing vessel that has undertaken IUU fishing into the Kingdom.

“The Navy has move the boat to the Phuket Deep Sea Port,” V/Adm Ronnapop said.

However, the report failed to name the persons arrested, and failed to confirm whether any fish or other sea catch was already on board at the time the boat was seized.

In 2015, the illegal Antarctic fishing trawler Kunlun, previously registered as the Taishan, somehow managed to flee Phuket after being seized and impounded at the Phuket Deep Sea Port.

A haul of 182 tons of Patagonian toothfish, known in Thailand as “snow fish” and known elsewhere as Chilean seabass, was seized as the captain had illegally reported the haul as grouper.

The fish were reportedly caught in a protected area of Antarctic sea waters. (See stories here.)

No authorities involved in the seizure were willing to comment on what happened with the captain and crew who were allegedly arrested.

Phuket Marine Office Chief at the time, Phuriphat Teerakulpisut, was unavailable for comment.

Phuket Customs officials also declined to comment on the missing ship and its crew. (See stories here and here.)