PHUKET: An Indian tourist couple from Mumbai are safe after spending hours in the water off Phi Phi Island clinging on to an overturned kayak after they were blown offshore by strong winds late yesterday afternoon (Jan 21) 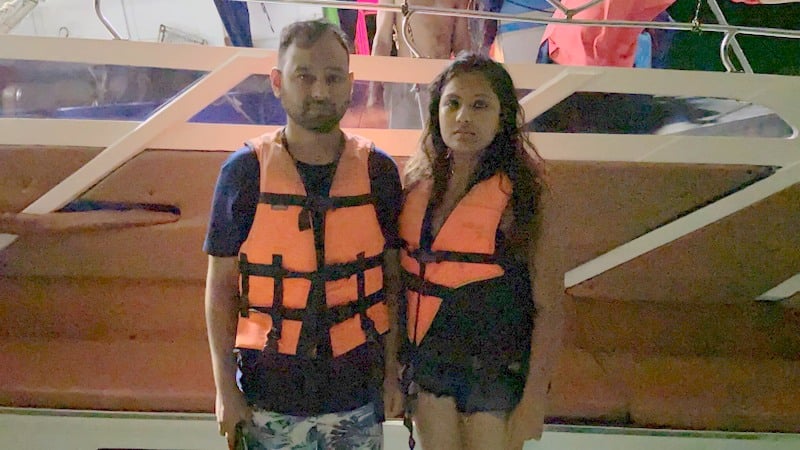 Staff at the hotel where the couple were staying notified police yesterday evening after the couple had contacted relatives back in India, complete with their location, Snr Sgt Maj Sanya explained.

The relatives in India then informed the hotel, he added.

“The wind keep moving them away from the position they had given. Local fishermen and tour boats joined the search of them, and finally a fishing boast named ‘Yuththanawee Numsup 11’ found the couple at around 9pm,” he said.

“A crewman on the boat saw a light on the water, so they went to see what it was and found Mr Jain and Ms Basakhetre were hanging onto their kayak, which was upside down.

“They had used the flashlight on their phone. One of their paddles was missing. They seemed exhausted and shocked when crew saw them,” Snr Sgt Maj Sanya said.

Snr Sgt Maj Sanya and Tourist Police boarded a speedboat ro rendezvous with the fishing boat, and brought the couple safely on board at about 10pm.

“We safely delivered them back to their hotel back here on Phi Phi,” Snr Sgt Maj Sanya said.

“The couple explained that they had rented a kayak at Loh Dalum Beach in order to go to Monkey Beach, but the wind was too strong and they never made it.

“Mr Jain knows how to paddle properly, but Ms Basakhetre does not. That made it difficult for them, especially against the strong wind,” Snr Sgt Maj Sanya said.

Snr Sgt Maj Sanya warned any other tourists looking to rent kayaks in the current windy conditions to exercise sensible caution when taking to the open water.