ChinesetourismaccidentsSafetymarinetransport
By The Phuket News 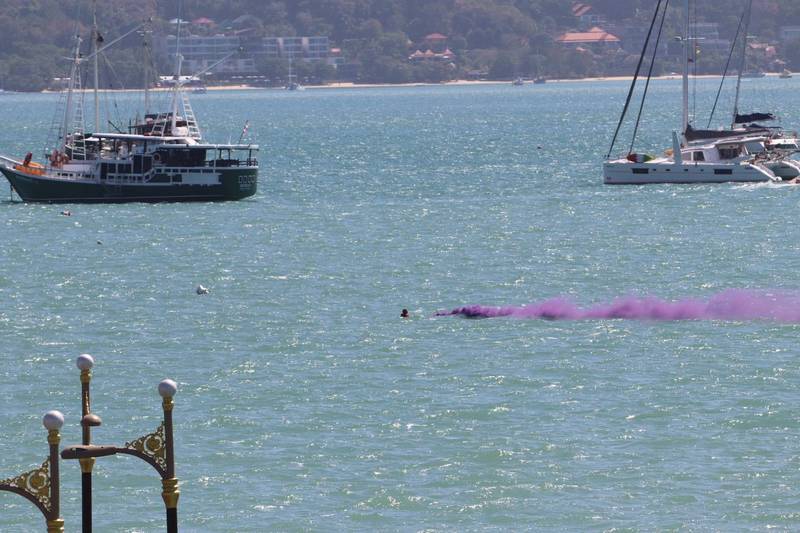 Present for the occasion was Deputy Minister of Interior Niphon Boonyamanee, who presided over the opening ceremony of the joint safety-security campaign involving the Peaceland Foundation, whose staffers will be stationed with Phuket rescue teams and local police throughout the Chinese New Year holidays.

Mr Niphon explained that the joint campaign is being conducted in order to strengthen the relations between China and Thailand and to boost confidence among tourists from China and other foreign countries.

Taking part in the sea-rescue exercise were officers from the Phuket office of the Department of Disaster Prevention and Mitigation (DDPM), as well as personnel from the Royal Thai Navy Third Area Command, Marine Police, Tourist Police, Phuket Provincial Police and medical teams from Vachira Phuket Hospital, along with rescue experts from Peaceland Foundation.

The drill simulated a tour boat experience engine failure and starting to sink. The officers received the distress call and conducted a rescue mission to safely recover the tourists and the crew on board the boat by using rescue boats and helicopters.

“All the marine accidents that happen affects to Thailand’s and Phuket’s tourism image. This reduces the number of tourists [coming to Phuket, and Thailand], and will affect the number of people employed by the tourism industry and even affect country’s GDP,” Deputy Minister Niphon said today.

“This is especially so during the Chinese New Year, when a lot of tourists come to Phuket,” he added.

“This is a good opportunity for the Peaceland Foundation and local government agencies to show the how well they can work together, and learn to improve,” he said.

Governor Phakaphong said, “Phuket is a famous tourist destination, so the measures to prevent disaster or accidents from happening is important, as well as our preparing and practicing to improve our officers.”