Phuket’s Por Tor ‘Hungry Ghost’ Festival is on its way

Phuket’s Por Tor ‘Hungry Ghost’ Festival is on its way

PHUKET: The annual Por Tor Festival, known throughout the Southeast Asia as the “Hungry Ghost Festival”, will return to Phuket from August 26 to September 12. A girl lights a candle as part of a ceremony during the Por Tor 'Hungry Ghosts' Festival last year. A boy holds a selection of cakes as offerings during the festival last year. A host of cakes are traditionally offered to appease the spirits during the festival. 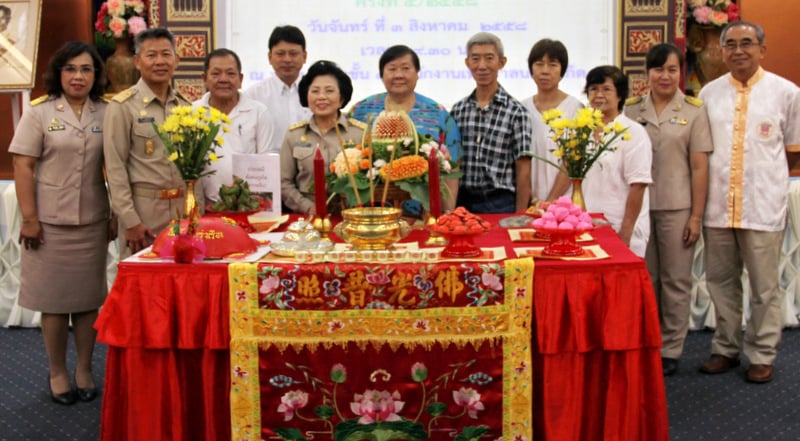 Phuket Town Mayor Somjai Suwannasupapana (centre, left) said the festival also brought luck and good health in return to those who made offerings. For many Chinese, the turtle represents strength and is also a symbol for longevity.

“The Por Tor Festival usually falls on the 15th day of the seventh waxing moon according to the Chinese calendar and Thai-Chinese people believe that the spirits of ancestors are released to visit their relatives during this festival,” explained Somjai Suwannasupapana, Mayor of Phuket Town.

“The festival is also called the Hungry Ghost Festival, as believers prepare food not only for their ancestors but also to nourish spirits who have no living family to visit,” Mayor Somjai added.

“Every year at this time, Phuket holds the Por Tor Festival to give thanks and offering to our ancestors as a way to express our gratitude. This practice have been passed on to us from generation to generation.

“This annual giving not only gives the spirits great food, but also brings luck and good health in return to the givers,” Mayor Somjai added.

During the festival in Phuket, various foods, fruits and colourful desserts are placed at altars for the spirits of ancestors. Many people also set up extra offerings at the back of their homes to invite the lost souls that have no family to come and enjoy the festivity.

The main attraction for the festival are red turtle cakes called Ang Ku, which come in various sizes and are made from wheat flour and sugar.

For many Chinese, the turtle represents strength and is also a symbol for longevity. The colour red simply means good luck to many Thai-Chinese descendants.

“There will be two parades, on August 30 and September 1.

On August 30, the “Procession of the Red Turtle” will begin at 12:10pm, starting at 72nd Anniversary Queen Sirikit Park on Thalang Rd and ending at the fresh market on Ranong Rd.

On September 1, the procession will begin at 5pm, starting at the 72nd Anniversary Queen Sirikit Park and ending at the Bang Neow Shrine on Phuket Rd.

Dates of festivities at participating locales and shrines in Phuket Town this year: